What Happened in MKO’s Annual Gathering in Paris 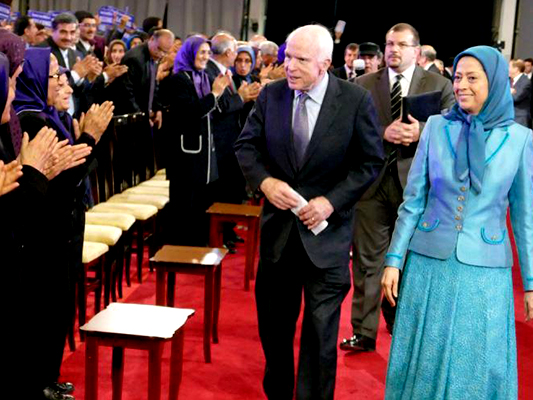 During the annual gathering of the terrorist Mujahedin-e Khalq Organization (MKO) in France’s capital, the participants made remarks against the Islamic Republic which amount to stark violations of the common and international laws.

The MKO gathering was attended by a number of western and Arabic politicians notorious for their anti-Iran stances.

A noteworthy point about this gathering was the presence of some French politicians as well as delegates from French municipalities. France has been hosting the terror group for a long time and refuses to extradite them to Iran to be put on trial for killing over 12 thousands of Iranians.

Iran’s Foreign Minister, Mohammad Javad Zarif held talks on Friday with French President and Foreign Minister. Before wrapping up his visit to France, Zarif said it is regrettable that France government allows the terror group to operate freely in the country.

During the talks, the Foreign Minister said the issue of MKO was raised. He said the issue is a moot point in relations between Iran and France and stressed that the French side assured him that there is no connection between France government and the terror group.

The indifference of French officials to Iran’s repeated warnings has sparked outrageous reactions from Iranian people and officials.

In reaction to the Paris gathering which came just hours after the visit of Iran’s Foreign Minister, the Journalist and the editor in chief of Farsi-language “Iranian Diplomacy” Website, Sergey Barseghian wrote, “This fact that a terror group holds a gathering attended by former officials of certain countries against the legal and official government of a member of United Nations is not only a moot point, but also an explicit violation of international law.”

He called on Iran’s Foreign Ministry as well as Iran’s embassy in Paris to take the issue seriously and said the timing of Zarif’s visit to France is controversial particularly because the gathering had ben planned earlier and Foreign Ministry was aware of it.

What Did MKO’s Friends Say?

One of the main lecturers of the MKO’s gathering was John Bolton, the former US ambassador to the UN who is notorious for his warmongering record across the globe. In an address to the MKO gathering, Bolton stressed that the US President, Donald Trump is against the “regime of Tehran”. He also called for overthrowing the Islamic Republic.

Then Nasser al-Hariri a member of the negotiating team of the Syrian opposition in Geneva took the podium. He voiced his support for the terror group.

Like the MKO, the Syrian opposition have been fighting against their nations over the past decades.

In line with the US, Syrian opposition, as well as some European countries, Head of the MKO or MEK terrorist group Maryam Rajavi called for sanctions on the Islamic Revolution Guards Corps (IRGC).

Back on Friday, the US ambassador to the UN and some European countries denounced the missile capabilities of the IRGC. Last month, the IRGC targeted the positions of ISIS in the Syrian city of Deir ez-Zor.

Rudy Giuliani, the former New York City Mayor and an informal advisor to the US administration on cyber security was another American figure who took the podium.

During his ridiculous statements, Giuliani praised the performance of terrorist group of MKO and said the United States always supports MKO. He went on saying that the US stands by the MKO and its values and remains vigilant against Iran’s threat and will not allow the country to turn into a ruler in the Middle East and a nuclear power.

He also claimed that the slogan of freedom of Iran is tied to the name of Maryam Rajavi and emphasized the time has come for regime change in Iran.

As the gathering was underway in Paris, Iranian internet users published tens of thousands of tweets to express their hatred at the terrorist group.

Newt Gingrich, former member of the US House of Representative who had called for bombarding Iran in the past took the podium and said he is deeply impressed with the MKO as a “movement”.

Then Turki al-Faisal, former Saudi Arabian ambassador to the US called Iran a sponsor of terrorism. Faisal who used to serve as Saudi Arabia’s Head of Intelligence Services went on saying that Iran’s recent presidential election was undemocratic. This comes as his own country is run by tribal and racial mechanisms.

Former US Senator, Joseph Lieberman made similar remarks and called Iran the “Capital of Fundamentalism” in the region.

For his part, former French Foreign Minister, Bernard Kouchner whose country has been hosting the terror group for a long time, called Iran a “base for Islamic extremism”.

Delegates from other European countries as well as Britain and Poland echoed the same anti-Iran remarks.

One of the main points about the MKO’s annual gathering in Paris is the hefty amount of money that the terror group spends to attract people and notorious anti-Iranian figures.

The speakers of the gathering have not yet announced the amount of money they got for their speech. In a report several months ago, the Associated Press published in details the amounts of money that the terror group paid to some of the American officials with close connections with Trump.  According to the report, Rudy Giuliani and Newt Gingrich, close advisors to Trump have received money from the MKO to deliver speech during its previous gathering. Reports say, Elaine Chao, the US Secretary for Transportation has received at least $50,000 to deliver a five-minute speech during last year’s gathering of MKO.

Meanwhile, there are a multitude of reports saying MKO has spent hundreds of thousands of dollars to provide European and African students across the world with the budget of their trips’ to France to take part in its annual gathering.

The group cannot attract the Iranians mainly due to the hatred that Iranians from all walks of life have developed against the terror group for its complicity in the crimes committed by the  nation’s enemies from former dictator of Iraq, Saddam Hussein to the US and Israel.