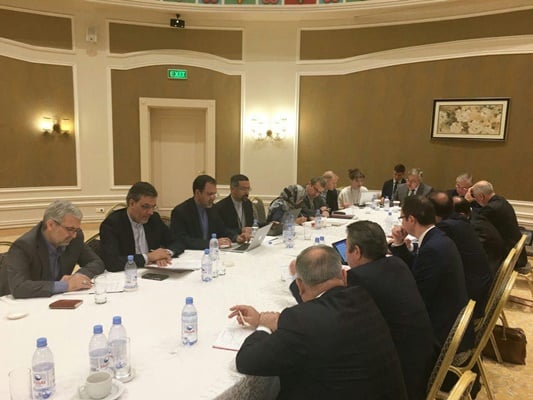 Iran, Turkey and Russia – the guarantor states of Syria ceasefire – have held trilateral meetings in the Kazakh capital Astana.

The preparatory meeting was attended by Hossein Jaberi Ansari, a senior assistant to Iran’s Foreign Minister in Political Affairs; Alexander Lavrentiev, the Russian President’s Special Envoy on Syria; and Sedat Onal, the Deputy Undersecretary of the Turkish Foreign Ministry.

During the Monday meeting, the participants explored the draft statement of the Ninth Round of Astana Talks on Syria Crisis.

They also conferred on the results of the second meeting of the committee charged with swapping prisoners and the fate of the people who disappeared or were abducted during Syria crisis. The meeting was held at the expert level by delegations from the three countries, the UN and the International Committee of the Red Cross on the sidelines of Astana Talks.

Astana talks on Syria kicked off earlier Monday with the participation of Syrian delegation headed by Bashar al-Jaafari, the current permanent representative of Syria to the UN.

Delegations from Jordan and the United Nations have taken part in the talks as observers while the US did not participate in for unknown reasons.

Turkey, Russia and Iran also held bilateral meetings during the ninth round of Syria talks.