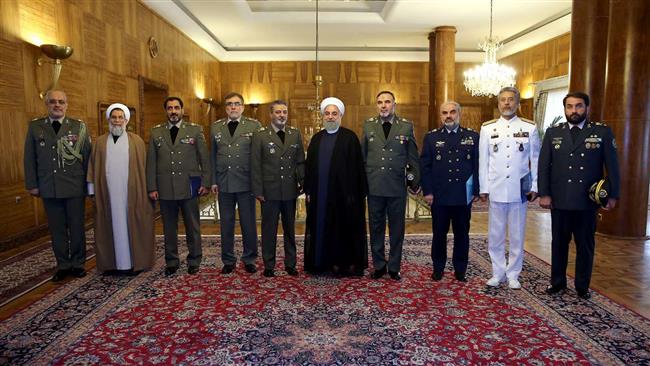 “The [Iranian] government and nation have confidence in the Army as faithful and self-sacrificing armed forces and the government will continue its support for the Armed Forces,” Rouhani said in a meeting with high-ranking Army commanders on Saturday.

He added that the Armed Forces should also stand by the administration in any sector deemed necessary and help the executive branch of the government run the country’s affairs.

The Iranian chief executive described public trust and affiliation with no particular political party as the “biggest assets” of the country’s Army.

Rouhani commended the Armed Forces’ performance after the victory of the Islamic Revolution in 1979, particularly during the eight-year Iraqi war on Iran in the 1980s.

US President Donald Trump delivered an anti-Iran speech on October 13, in which he said he would not continue to certify Iran’s compliance with the terms of the multilateral nuclear deal, reached under his predecessor Barack Obama, and warned that he might ultimately terminate the agreement.

Trump also announced sanctions on Iran’s Islamic Revolution Guards Corps (IRGC), which he accused of destabilizing the Middle East and threatening American interests in the region.

Senior Iranian officials slammed Washington’s move against the IRGC, with Foreign Minister Mohammad Javad Zarif saying Iranian people from all walks of life strongly supported the defenders of the country and the region against terrorism.

The IRGC is a branch of the Iranian Armed Forces, a standing army of a United Nations member state. It has been effectively providing military advisory support for the elected governments of Iraq and Syria in their battles against various groups of extremist militants.

Some of those militant groups are widely reported to be receiving logistical, financial, and other forms of support from the US government, particularly in Syria, where Washington has attempted but failed to have the Syrian government toppled.