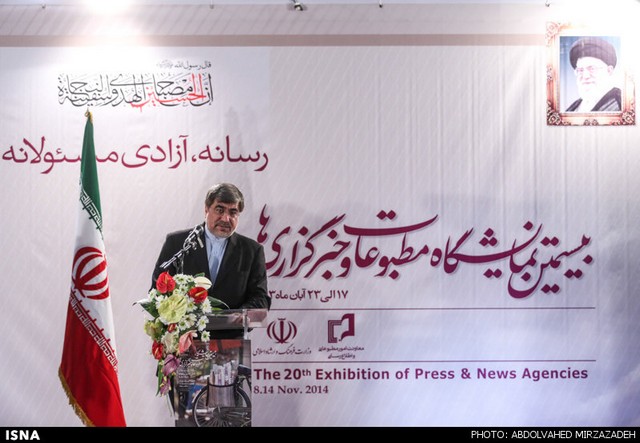 Ali Jannati says commitment to the truth and independence in decision-making without factional bias constitute the much sought-after freedom of the press.

Government intervention in media runs counter to the tenets of sustainable political and social security and the government believes the media should be tasked with supervising their own performance, Minister of Culture and Islamic Guidance Ali Jannati said in a speech at the inaugural of the 20th Exhibition of Press and News Agencies on Saturday. The following is an excerpt of a report Mehr News Agency filed on the comments of the culture chief:

Freedom is part of human instinct. In quest of freedom, honorable individuals are even ready to risk their lives. Many individuals have made the ultimate sacrifice as they have tried to shake off the yoke of dependence and constraint.

Responsible freedom is a smart motto chosen for this year’s exhibition, because it defines freedom within the framework of norms. Commitment to the truth and independence in decision-making without factional bias constitute freedom. […] Publication of news in line with norms as well as legal and moral frameworks and avoidance of rumors are the pillars of responsible freedom, which is touted by many media outlets around the world.

The government and the Islamic Republic do believe in the freedom of the press in keeping with laws and this government [led by President Rouhani] tries to turn such commitment into reality.  Responsible freedom is not unbridled freedom. The media hold the government accountable for what it does; responsible freedom means the press should be held accountable for what they do too. The press should not turn into the pawns of political parties and at the same time claim to represent the public opinion.

Journalists need a transparent social convention to facilitate their workings; […] Formulation of a moral code of conduct can help promote professionalism and tamp down plagiarism and eliminate the possibility of failure by some managers to respect the rights of journalists or the lack of commitment on the part of some journalists to the institutes they work for.

The government plans to send a motion to parliament laying out the formation of a media guild that governs the relations between journalists and members of the public. Work ethics and commitment to moral standards are mostly absent in the Iranian press. Professional ethics should be a top priority of the Iranian press.

The government should privatize many media outlets it owns. Promotion of the private sector is a progressive pillar of the Iranian Constitution that needs more attention.