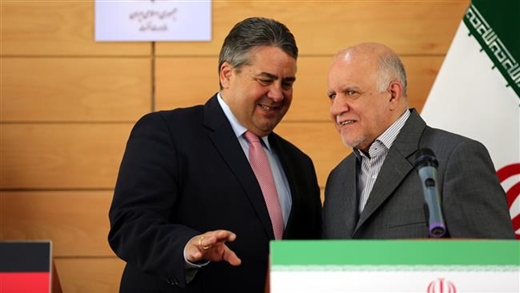 German companies are ready to transfer technology and technical know-how to Iran as part of efforts to re-engage with Iran on economic matters, said Sigmar Gabriel.

“German companies are not only prepared to sell products to Iran, but also seek to expand lasting and stable economic cooperation (with the country),” Sigmar Gabriel was quoted as saying by the Iranian media on Monday.

The German official also pointed to the long-lasting trade ties between Berlin and Tehran and said German companies are ready to transfer technology and technical know-how to Iran as part of efforts to re-engage with the country on economic matters.

He made the comments during a meeting with Iran’s Petroleum Minister Bijan Zanganeh in Tehran.

The German official also said a ministerial-level meeting of Germany-Iran economic commission would take place early next year in Tehran.

“After the removal of sanctions, German companies will start to cooperate with Iran to modernize the country’s industries,” he noted.

Accompanied by dozens of German business leaders, Gabriel is on an official visit to Iran in a bid to revive trade ties with Tehran.

German exports to Iran reached 4.4 billion euros in 2005 but plunged to 1.8 billion euros eight years later as the US and its Western allies imposed sanctions on Iran over its nuclear program.

German economy and energy minister is the first high-ranking Western official visiting Iran after the conclusion of nuclear talks between Tehran P5+1.

The talks have been aimed at securing a comprehensive deal which will see all sanctions against Iran removed in exchange for certain curbs on Tehran’s nuclear program.

Many Western companies, including German firms, have already kept a close eye on the final result of the nuclear talks between Iran and the five permanent members of UN Security Council plus Germany, amid rising hopes of returning to the country’s untapped market of 78 million people.