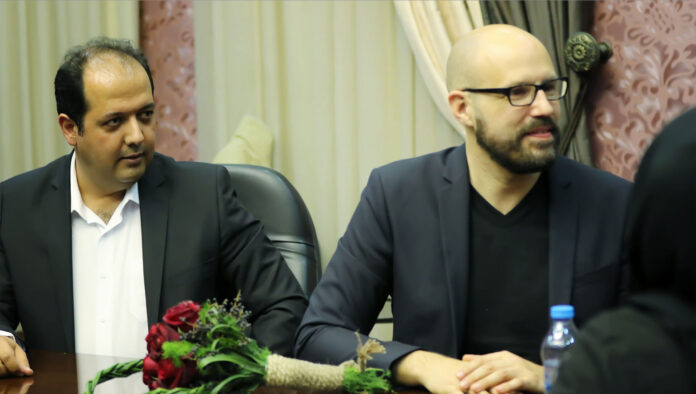 German electronic band Schiller, led by Christopher von Deylen, is to perform a series of concerts starting Monday, December 11, at the Ministry of Interior Auditorium in Tehran.

Schiller, named after the German poet and dramatist Friedrich Schiller (1759-1805), was formed by von Deylen and Mirko von Schlieffen in 1998. Their first single ‘Glockenspiel’ was a great success in Germany. Around 2001 or 2002, von Schlieffen left, leaving von Deylen the only permanent member.

Slated for December 11-15, the concerts will cover a selection of the memorable hits created by the band. “I also have a little surprise for my Iranian fans,” von Deylen said after arriving in Tehran on Dec. 9, Mehr News Agency reported.

“I’ve got a good feeling. We had come to Iran some 10 years ago, when we visited Tabriz (capital of East Azarbaijan Province), Isfahan (capital of Isfahan Province) and Tehran. All members have this good feeling. We’re eager to see how people will receive our concerts. I’ve always believed that when you compose a poem or a musical piece, you can take it around the world and share it with all people,” von Deylen, 47, said.

The concerts are organized by Ritmeno.ir, a local music website, in collaboration with the Tehran-based cultural institutes of Nay-o-Ney and Tanin-e Roya-e Pars directed by Mehdi Kashi and Mostafa Kabiri respectively.

“On the internet, I’ve always received positive feedback from Iranian fans. On many occasions, they requested me to come over and perform in Iran. Last year, following a correspondence with Mostafa Kabiri, we decided to hold a concert in Iran,” von Deylen said. “I really am happy for this invitation.”

On each of the five nights, Schiller is going to entertain audience for two hours with his selected hits.

Von Deylen does not provide any vocals for Schiller productions himself. Vocals are sung by guest artists. However, for the Tehran concert Von Deylen will only perform the instrumental pieces.

The concert venue is located at Shahid Gomnam St., Fatemi Square. Tickets are available at Tik8.com. The first two concerts on December 11-12 are already sold out.