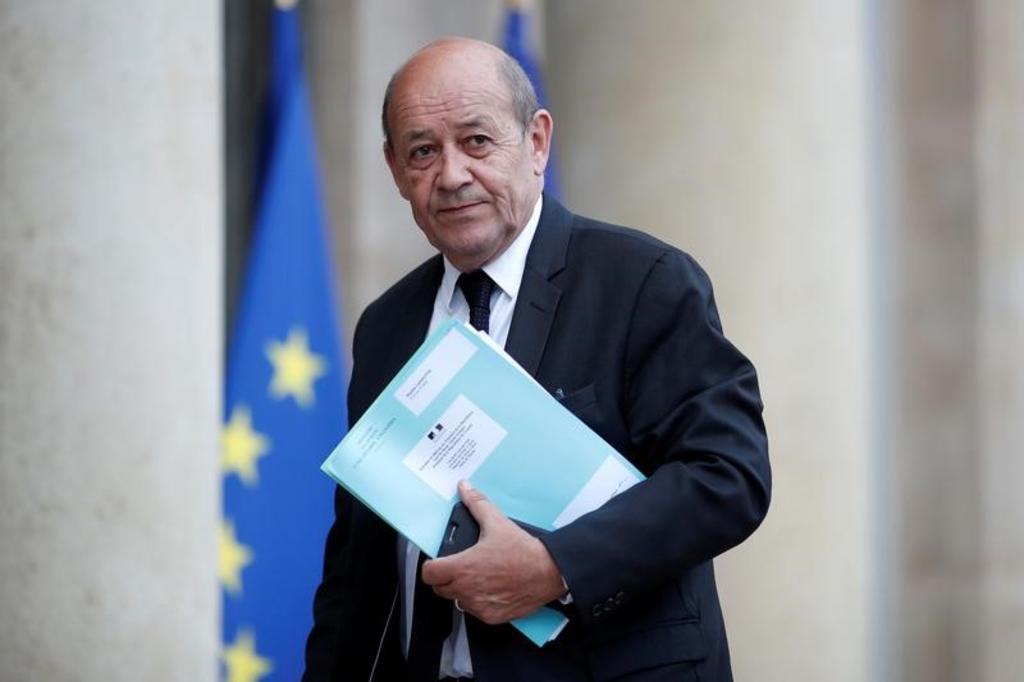 Foreign Minister Jean-Yves Le Drian is in Tehran for a two-day visit which is expected to be far from easy after a series of harsh statements made by French leaders about Iran's missile program and its role in the Middle East.

The top French diplomat was greeted by a group of protesters as his flight touched down at Tehran’s Mehrabad airport mid-night Sunday.

The protesters carried placards which read “Iran is not Libya,” in an apparent reference to France’s role in NATO’s bombing of the African country and the ouster of Muammar Gaddafi.

Ahead of his visit, Le Drian said Iran should address “concerns” over its ballistic missile program or risk new sanctions.

“There are ballistic programs of missiles that can reach several thousand kilometers which are not compatible with UN Security Council resolutions and exceed the sole need of defending Iran’s borders,” he told the Journal du Dimanche newspaper. “If not tackled head-on, this country risks new sanctions.”

Iran’s Foreign Ministry has said that it is expecting “frank” negotiations.

“We certainly have to have absolutely frank talks with the French foreign minister regarding the JCPOA,” ministry spokesman Bahram Qassemi said, referring to the Joint Comprehensive Plan of Action or the 2015 nuclear deal with Iran.

President Donald Trump has set a May 12 ultimatum for the European signatories to change the agreement. Otherwise, the US will withdraw from the deal.

In an interview published Monday, Zarif criticized the European Union for pursuing an extremist policy with Tehran in order to keep Washington in the agreement.

“In order to keep the United States in the Iran nuclear deal, European countries are suffering from extremism and this will ultimately undermine Europe’s policy,” he told Tehran-based Etemad daily.

Zarif stressed that Iran cannot be pushed around and warned that “any action to satisfy the party that has most violated the nuclear agreement is useless.”

“At present, two groups have violated the nuclear deal: the United States and Europe. The Americans because of Washington’s policy and the Europeans because of the US policy,” he said.

“The Europeans, because of the policy of the US could not meet their commitments, especially in the banking sector. Therefore these two groups are not in a position to set conditions for the country that has fully implemented its commitments,” the minister added.

Britain, France and Germany are reportedly working with US officials to draw up a strategy to “improve” the Iran nuclear deal in return for Trump keeping the pact alive.

Iranian officials have stressed that the country will not accept any change to the deal. Iran’s armed forces spokesman said Saturday there could be no talks on the country’s missile program without the West’s destruction of its own nuclear weapons and long-range missiles first.

“The condition for negotiations on Iran’s missiles is the destruction of America’s and Europe’s nuclear weapons and long-range missiles,” Brigadier General Masoud Jazayeri told the official IRNA news agency.

Another outstanding issue is Iran’s role in the Middle East and the West’s wish to pressure Islamic Republic into stopping its support for the Syrian government.

In their phone conversation, the two presidents agreed to work together in the coming days with the United Nations, Syria and other countries involved, to improve the situation for civilians and make a ceasefire effective, it added.

One key common area between Iran and the European countries is their determination to keep the nuclear agreement alive.

During his stay, Le Drian is also expected to discuss bilateral ties.

In 2017, France was Iran’s second biggest trade partner in the European Union. According to the French Treasury, Iran’s trade exchanges with France stood at €3.8 billion last year.

Since the lifting of the sanctions in January 2016, French automakers have piled into Iran’s resurgent market, helping turn around a period of slipping sales which occurred when they left the country in 2012.

Also, France’s oil and gas company Total has signed an agreement worth $4.8 billion for the development of South Pars Phase 11.