‘France, Germany Step in to Bypass US Bans by Hosting SPV’ 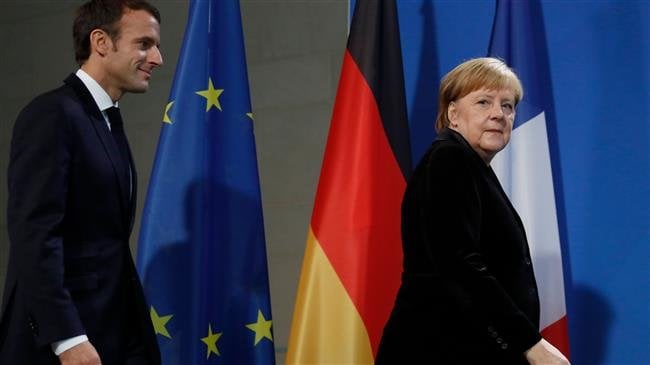 France and Germany will likely host the Special Vehicle Purpose (SPV), a special payment channel created by Europe as part of its efforts to keep trade flowing with Iran in defiance of US sanctions, senior diplomats told the Wall Street Journal.

The Monday report said the governments participating in the payment channel will directly manage the company (mechanism) in order to prevent the US from putting direct sanctions on it.

According to the diplomats, British officials are also mulling over joining France and Germany in order to rescue the European attempt to circumvent the US sanctions and salvage the Iran nuclear deal following the US’ withdrawal in May.

The report said if France plays host to the SPV, Germany will take the helm, and vice versa.

According to the report, the mechanism is not finalized yet and finishing touches will be discussed on the sidelines of the 2018 G20 Buenos Aires summit, scheduled to begin on November 30.

The move comes after Luxembourg and Austria, under the US pressure, refused to host the SPV, with Luxembourg officials being warned that hosting the mechanism could damage the country’s place as a major financial center hosting many international investment funds, European diplomats said.

The report was released during the visit of Iran’s nuclear chief Ali Akbar Salehi to Brussels, Belgium, where he attended the third seminar on peaceful nuclear cooperation between Tehran and the European Union.

The European Union hosted the AEOI chief at the seminar aimed at showing the bloc’s continuing support for the Joint Comprehensive Plan of Action.