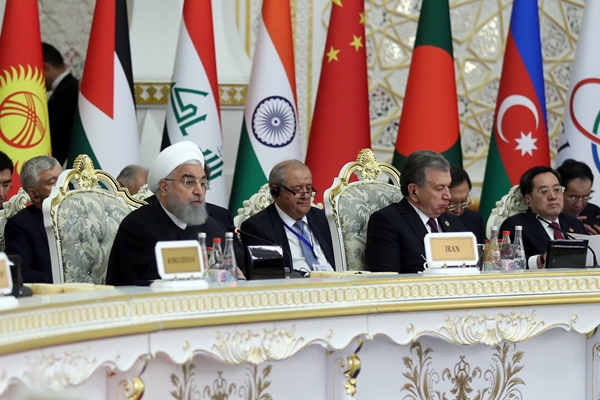 Iranian President Hassan Rouhani says the policies of foreign powers have turned the Middle East into the most unstable region in the world.

Rouhani made the comments in a Saturday address to the 5th summit of Conference on Interaction and Confidence-Building Measures in Asia (CICA) which is underway in the Tajik capital Dushanbe.

“The interference of some foreign powers in the internal affairs of the countries of the Middle East region, forceful unilateral policies, terrorism and extremism, their blatant breach of promises and lawlessness in matters related to international peace and security, including the important nuclear deal with Iran, known as the Joint Comprehensive Plan of Action (JCPOA), have made our region one of the world’s most instable regions,” he noted.

“The Islamic Republic of Iran is looking for the values ​​that Your Excellencies have seen during the last four decades in our foreign policy, including the fight against terrorism and extremism, which present a harsh and violent image of Islam, sheltering innocent people who have been grappling with war and its resulting disasters, fighting unilateralism by which a country tries to dominate others with material power and the use of force, explicit opposition to the production of any weapons of mass destruction from nuclear to chemical, and ultimately, constructive interaction with all countries that believe in these values,” he said.

President Rouhani also referred to the ongoing situation in Palestine, Iraq, Syria, Afghanistan and Yemen as the result of the US regional policy.

He then said Iran can’t remain committed to its pledges under the Iran nuclear deal unilaterally and that the remaining sides of the nuclear deal should play their role to preserve the accord.

“Obviously, Iran cannot stick to this agreement unilaterally. It is necessary that all sides of this agreement contribute to restoring it,” He said and added Iran needs to see positive signals from other sides of the deal.

President Rouhani arrived in Dushanbe from Bishkek after taking part in the 19th summit of the Shanghai Cooperation Organization. On the sidelines of the summit, he held talks with a number of leaders of the member states participating in the talks.