FMs will decide about some disputed key issues: Takht-e Ravanchi 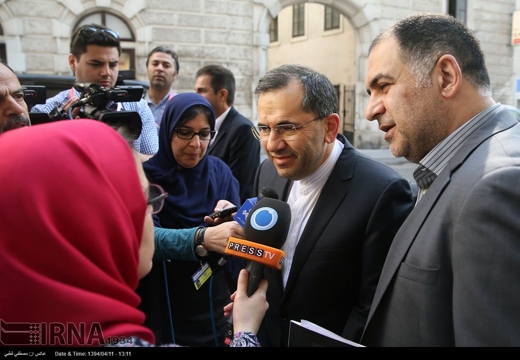 A senior Iranian nuclear negotiator on Thursday talked about possibility of leaving one or two outstanding key issues to be decided on the last days of the nuclear talks by foreign ministers of the negotiating parties.

Speaking to reporters in Vienna, where the nuclear talks between Iran and the six world powers are underway, Takht-e Ravanchi said, ‘it is almost the last days of talks and we don’t exactly know on what day they would be ended. We are at a stage now that the talks are very intensive.’

‘Meetings begin early in the morning and continue until late at night. Even after the meetings with the other side, our private meetings begin at the end of the night,’ Takht-e Ravanchi said.
Deputy Foreign Minister for European and American Affairs Majid Takht-e Ravanchi told reporters here that the expert-level talks have ended but discussions will be further held at the level of deputy foreign ministers.

He declined to elaborate on the issues due to be discussed by foreign ministers. He just said that they are key issues that cannot be concluded in talks at the level of experts or deputies.

Takht-e Ravanchi said that a particular date has not been set yet for a meeting between Iran and the Group 5+1.

Noting that the foreign ministers and the European Union foreign policy chief Federica Mogherini will come to Vienna on Thursday, the diplomat said however, meetings will be held bilaterally.

He noted that the foreign ministers will leave Vienna later in the day and will later decide on their return to the talks.