FM Zarif Warns of Loss for All if Nuclear Deal Collapses 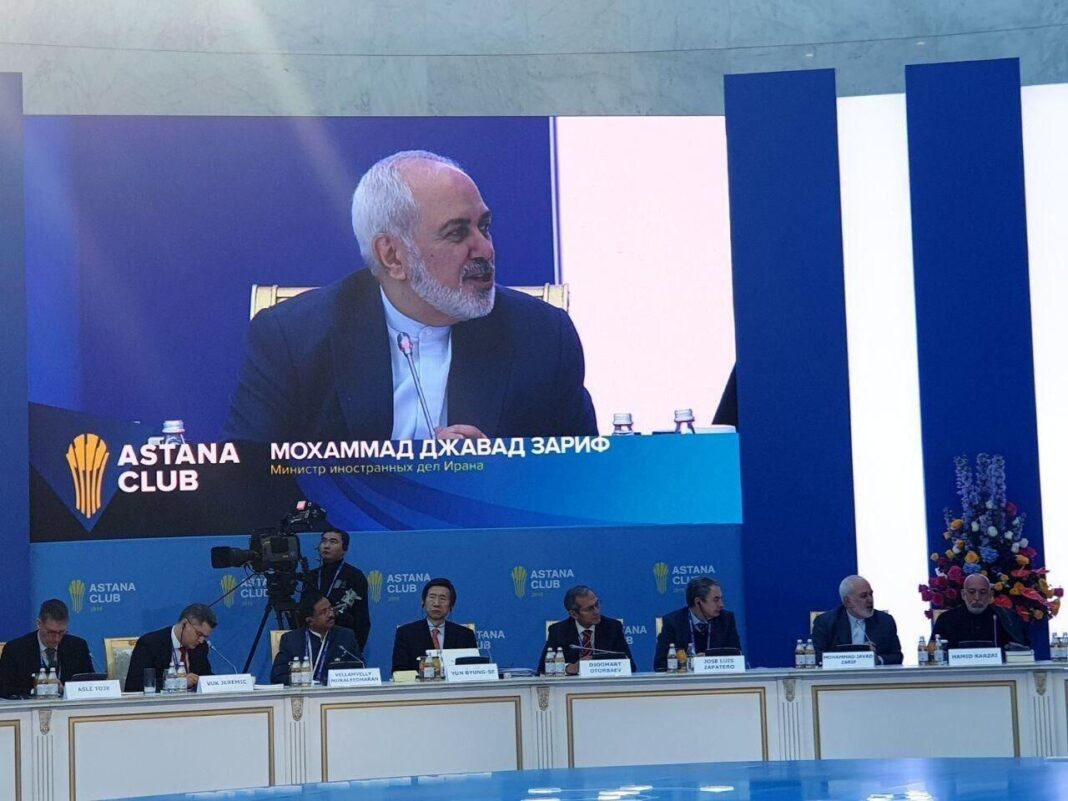 In a speech in Kazakhstan, Iran’s foreign minister has warned of a return to a win-lose approach in Iran-West relations and spoke of the possibility of defeat for all sides involved in the nuclear deal.

Earlier this week, Iranian Foreign Minister Mohammad Javad Zarif left for Kazakhstan to attend the annual Astana Club summit and meet with Kazakh officials. He lectured there as the keynote speaker at the opening ceremony. Zarif made some important remarks regarding Iran nuclear deal in one of the Astana club panels. However, his remarks received little media coverage.

Zarif’s statements indicated that he has serious concerns about the future of the Joint Comprehensive Plan of Action.

“We do not want to build nuclear weapons, but we strongly oppose the violation of our rights,” Zarif told the Astana Club Disarmament and Non-Proliferation Panel. “Even if what is promised to Iran in the area of economic normalisation (in the JCPOA) is partially fulfilled, we are ready to show good will and return to full implementation of the nuclear deal.”

“(But) if it is not carried out, we will unfortunately continue this path, which is again the same zero-sum path,” he added. “This is the path that will lead to the loss of all, but this is a path we have no choice but to move on. “

Zarif’s warning came as Iran had just taken its fourth step in reducing its nuclear commitments. In this stage, Iran resumed enrichment at Fordow nuclear facility in a move that was of great concern to the Europeans. On Monday, November 11, at the time of Zarif’s visit to Kazakhstan, the International Atomic Energy Agency (IAEA) in a report confirmed Iran’s uranium enrichment at Fordow. Moments later, the foreign ministers of the three European nations that have joined the nuclear deal, along with the EU foreign policy chief, issued a joint statement, implicitly threatening Iran with the return of international sanctions.

“We reiterate our readiness to review all of the mechanisms set forth in the brokerage, including the dispute settlement mechanism, to resolve issues related to Iran’s implementation of its nuclear deal obligations. We are in touch with other members of the JCPOA in this regard,” reads the statement. Although this statement is written in diplomatic literature, it has a significant threat within it. Europeans threatened Iran with activating dispute settlement mechanism. Although launching this mechanism does not necessarily mean rapid return of the UN sanctions) against Iran, but under the current circumstances that the Europeans accuse Iran of violating the nuclear agreement and at the same time they are not able to protect Iran’s economic interests, it is quite possible that activating the dispute settlement mechanism will lead to the return of the Iranian nuclear dossier to the Security Council.

To understand the significance of Zarif’s warning, one should take a look at three sides of Iran’s nuclear triangle:

Iran: Since May, Iran began the process of reducing its nuclear commitments on the first anniversary of the White House’s unilateral withdrawal from the nuclear deal and the return of Washington’s sanctions. As part of this process, four steps have already been taken to reduce commitments. The rationale behind this is to force or persuade Europeans to safeguard at least some of the economic benefits, particularly Iran’s oil and banking interests. While stressing on the reversibility of its commitment reduction steps, Iran says it will continue to reduce its commitments until its demands are met.

Europe: During the first three steps of the commitments rollback, the Europeans, while expressing concern that Iran would halt some of its commitments, said they would adhere to the deal as long as Tehran adheres to its obligations. However, after resuming uranium enrichment at Fordow, the Europeans changed their tune and threaten Iran with international sanctions. In the meantime, one thing must be paid attention to. In the recent Europeans’ statement, it was emphasised that Europe had fully adhered to its obligations. Iran, meanwhile, accuses Europe of failing to comply with the sections of the deal that are related to the normalisation of its economic relations. Europeans have been trying in the past few months to persuade the United States to decrease Iran’s oil sanctions to preserve both the JCPOA and pave the ground for direct Iran-US negotiations.

The United States: However, with Washington’s opposition to the European, the Europeans’ efforts failed. The US insistence on increasing sanctions on Iran has led Europeans to abandon the idea of securing Iran’s economic interests. When the Europeans say they have fully adhered to their commitments, it means that they are not responsible for the damages caused by US sanctions. On the other hand, the US, which is responsible for the current status quo of the nuclear deal, claims that the ball is now in Iran’s field. The US Assistant Secretary of State for Energy Frank Fannon told CNBC that the [Trump] administration has been very clear about the situation (talks with Iran). They support negotiations, but there are certain conditions that must be met. Launching proxy wars and creating instability in the region is not a (proper) way to come to the negotiation table.” The US insists on imposing sanctions and has tough conditions to negotiate with Iran. Therefore, the possibility of negotiations between Iran and the US is unlikely at present.

Taken together, these three sides show that Iran continues to reduce its commitments, Europe has no intention of securing Iran’s economic interests, and the United States is pursuing a “maximum pressure campaign” policy. What will this situation lead to? Will Europe carry out its threats if Iran suspends further nuclear commitments in the next two months? Will Iran change its “nuclear doctrine” if Europe’s threats come true and Iran’s nuclear case is returned to the Security Council? What would happen then? These are the questions that seem to have worried Zarif and prompted him to warn of the possibility of loss for all sides. In September 2014, Zarif said, “In the current world, zero-sum games that one country benefits from harming others is not considerable,” but with Donald Trump’s taking office in the US, things changed.