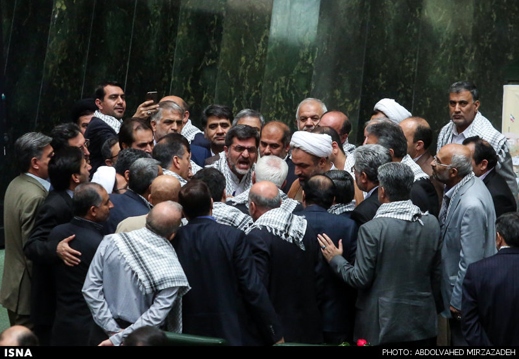 The Iranian foreign minister makes a convincing case in parliament for nuclear talks and the questions surrounding them. Speaker Larijani praises the explanations as sufficient.

Foreign Minister Mohammad Javad Zarif and his deputy Abbas Araghchi – who went to parliament on Sunday to brief the MPs on the latest developments of nuclear talks with P5+1 and clarify the ambiguities surrounding the negotiations – managed to convince the majority of representatives that the nuclear talks are moving in the right direction.

Entekhab, a news website, released a report on what happened in the closed-door session in the Iranian parliament, on exchanges between the top diplomat and the deputies, and on what came out of the session. The following is the translation of excerpts of the report:

The spokesman for parliament’s Presiding Board told reporters [after the meeting] that the foreign minister explained the highlights of the Lausanne statement for the MPs, adding [Speaker] Larijani urged support for nuclear talks and underlined that the demands of the Iranian nation and the [Islamic] establishment should be pursued in the talks.

For his part, Abbas Araghchi, who is a senior member of the negotiating team, provided details about the recent talks and the concerns raised by the Supreme Leader, Behrouz Nemati further said.

He went on to say that Foreign Minister Zarif and his deputy answered questions of four MPs who asked about the way sanctions are to be lifted and inspections of Fordow and [other] nuclear facilities.

“The Americans have adopted a carrot-and-stick policy over the past 30 years. We promise to effectively and properly defend Iran’s nuclear achievements,” Nemati quoted the foreign minister as saying in response to a complaint by an MP about the conflicting remarks of US officials.

The spokesman declined to say whether the MPs put a question to the foreign minister on US failure to keep its promises and said, “The issue cannot be explained here due to the fact that the briefing was not public, but the foreign minister raised some issues in this regard”.

Nemati then rejected reports that the number of centrifuges at Fordow will be reduced to 350 and said no change is expected to happen and the number will stand at 1,044.

He described the session with the top diplomat as calm and frank. It came as news agencies reported that a bitter verbal dispute broke out between Hamid Rasaei [a hardline MP] and Mehdi Koochakzadeh [a vocal supporter of former President Ahmadinejad] and Foreign Minister Zarif.

Later Larijani told reporters that Messrs. Zarif and Araghchi briefed the MPs on what has happened during nuclear talks in the two-hour session of parliament, adding their explanations were adequate [to convince the MPs].

The deputies expressed their views [after they heard the explanations of the foreign minister and his deputy], Larijani said, adding we hope that the talks could proceed properly and produce a good result for Iran.