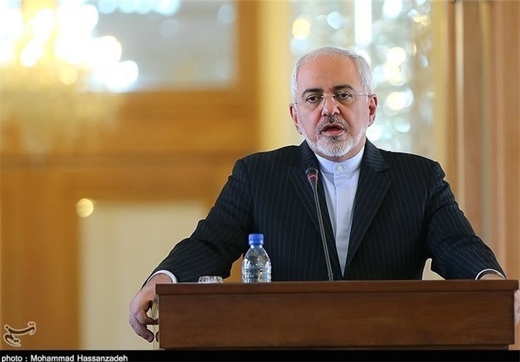 The top diplomat said the draft resolution recently submitted to the IAEA explicitly says it has fully considered the IAEA chief's report on Iran’s PMD case and has closed it.

Iranian Foreign Minister Mohammad Javad Zarif has given assurances that the case on the so-called PMD (possible military dimensions) in Tehran’s nuclear program will be closed by a UN resolution next week.

Speaking to Tasnim News Agency, Zarif pointed to a draft resolution recently submitted to the International Atomic Energy Agency (IAEA) Board of Governors by the P5+1 (Russia, China, the US, Britain, France and Germany), and said, “In the paragraph 9 of the draft resolution, there is emphasis on the closure of the PMD issue.”

The Iranian top diplomat added that the draft resolution explicitly says it has fully considered IAEA Director General Yukiya Amano’ report on Iran’s PMD case and has closed it.

The IAEA report is clear and says the agency has not found any sign or reason that shows Iran’s nuclear program has diverted to military activities, the foreign minister noted.

The draft resolution, which will be put to the vote in a session of the IAEA Board of Governors on December 15, will make it possible to close Teheran’s nuclear dossier and begin the implementation phase of the nuclear deal between the Islamic Republic and six world powers, also known as Joint Comprehensive Plan of Action (JCPOA).

The Road-map was signed on the same day that Tehran and the Group 5+1 reached a conclusion on a lasting nuclear agreement.

The agreement was officially adopted on October 18, and is going to take effect within the next few weeks.