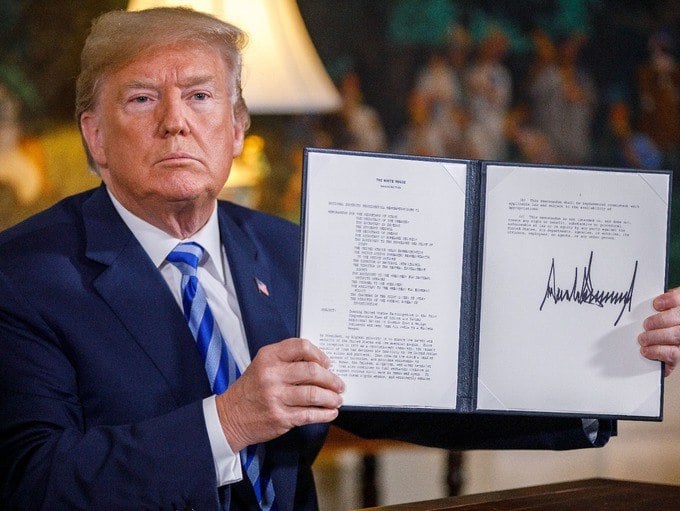 The next round of economic sanctions on Iran, which will start going into effect on Nov. 4, will mainly target the country’s oil and gas industries. These sanctions were eased after the 2015 signing of the Joint Comprehensive Plan of Action (JCPOA), commonly known as the Iran nuclear deal, but are being phased back in following President Donald Trump’s decision to withdraw from the accord six months ago.

Trump’s goal in reinstituting the sanctions is to kill the nuclear deal, to bring Iran’s economy to the point of total collapse, to contain Iran’s regional involvement in Syria, Iraq and Yemen, and, in spite of Washington’s denials, presumably to celebrate the collapse of Iran’s ruling regime. The White House’s official position is that, by increasing economic and political pressure, it aims to bring Iran back to the negotiating table in order to replace the JCPOA with a new deal that bears Trump’s name.

There are at least five reasons why Trump’s strategy will fail.

First, while the United States seeks to cut Iran’s oil exports to zero, it has become clear that this is impractical; there is no viable replacement for Iran’s 2.5 million barrels per day in oil exports. While Saudi Arabia previously claimed it had made up for any shortages, experts believe that Riyadh and its allies do not have the capacity to fully offset the loss of Iranian oil. Now that Iran’s oil exports have dropped to an estimated 1.5 million bpd – down from more than 2.5 million before the US withdrawal from the JCPOA in May – the price of the OPEC reference basket has gone up to around $76. If forecasts indicating that it could jump to $100 per barrel are correct, the price hike will make up for Iran’s loss of revenue even if Tehran’s exports are cut further to 1 million barrels.

Second, Trump’s trade war with China and the US imposition of economic sanctions against Russia make Beijing and Moscow less likely to work with Washington on Iran.

Moreover, the White House cannot count on cooperation from the European Union, which initiated nuclear negotiations with Iran in 2003 and which sees the JCPOA as one of its signature foreign policy achievements. Further, the EU increasingly views extraterritorial sanctions as a threat to its own identity and independence.

French Finance Minister Bruno Le Maire said recently that the “outcome of that crisis with Iran will be the chance for Europe to have its own independent financial institutions, so we can trade with whoever we want.” In the past, cooperation with all major powers was critical to creating an effective Iran policy.

Third, US sanctions have laid the groundwork for a historic change in the global financial system. For many decades, the US dollar has dominated the international financial markets. However, American withdrawal from the JCPOA has encouraged countries such as Russia, China, India and Turkey to use their local currencies to trade with Iran. If Europe succeeds in creating a financial system that is separate from the US dollar, other states can use euros in trade with Iran, diminishing US domination of global markets.

Fourth, the remaining signatories to the JCPOA view the nuclear deal as a means to counter American unilateralism. This is due to the fact that the JCPOA is a multilateral agreement backed by UN Security Council resolution 2231, which the Trump administration exited unilaterally and is now trying to punish other nations for implementing. Any capitulation to Washington on this issue would further buttress the current US approach. To avoid this, both Iran and the international community will see preserving the JCPOA as a strategic necessity.

Fifth, powerful US allies such as the EU and Japan continue to support the JCPOA.

Only a handful of regional allies – namely Saudi Arabia, the UAE and Israel – supported Trump’s decision to withdraw from the deal while other major regional players such as Turkey, Oman and Iraq continue to support the accord. At the same time, developments in other regional crises do not favor the United States and its allies: Bashar al-Assad, backed by Russia and Iran, is winning Syria’s civil war; the US campaign in Afghanistan has failed; Saudi Arabia has been unable to defeat the Tehran-backed Houthis in Yemen and Qatar has prevailed against the Saudi-led blockade. These developments will make it easier for Tehran to find workarounds to sanctions imposed by Washington.

For the past six decades, the United States has been the region’s hegemonic power.

However, Trump’s unilateralist approach and the future of JCPOA may change the calculation by creating a rift among the transatlantic allies, and bringing the eastern bloc powers, Europe and regional powers such as Iran, Turkey and Iraq, closer together. Moreover, the JCPOA has paved the way for other world powers – specifically Europe, China, Russia and India ¬– to preserve international agreements without the United States. This, coupled with American withdrawal from the international scene, has the potential to transform international power politics, shifting from an American-led system to a multi-polar world, with regional actors playing a more substantial role.

Against this backdrop, the next round of US sanctions against Iran is likely to increase Middle East tensions – and unlikely to bring Washington closer to achieving its goals on Iran.

* The article was originally published by Reuters news agency