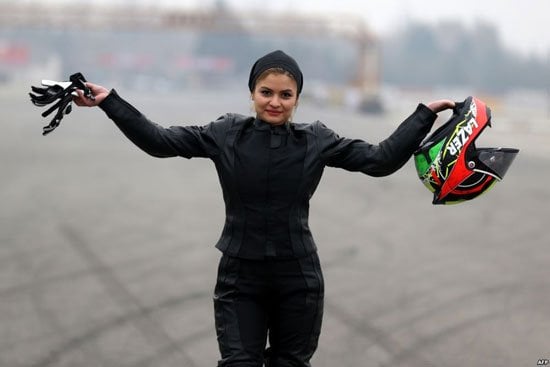 Having won the title of the only Women’s Race Championship held in Iran, Behnaz Shafiei is now the most prominent Iranian woman motorcyclist, but she still has bigger ambitions.

Here is the full text of the Shargh daily newspaper’s Farsi interview with this daring Iranian girl:

Q: You have been a fan of motorcycling since childhood. What makes a teenage girl pursue a strange career like racing?

A: Maybe a sense of obstinacy. I could not accept that someone could do something and I cannot. I started riding in 2004. I first rode on the streets; but I liked racing. Many people asked me if I can take part in motocross adventures. I was asking myself why not I should experience cross-country motorcycling. This prompted me to enter motocross riding. 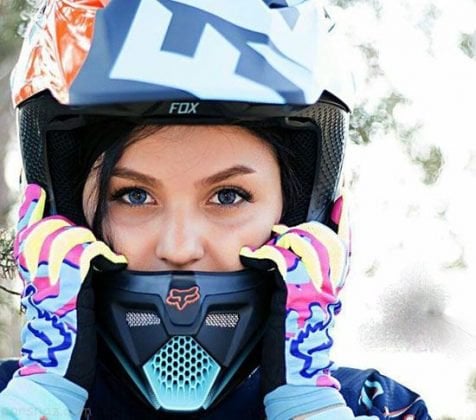 Q: Can you tell me when you got famous?

A: It was in 2015. At that time several major news agencies, including the Associated Press, filed a number of different reports about me. That’s because I was the first female motorcyclist who could get a license to enter the Azadi Stadium track. There, alongside some men, I went through a professional course in three days. After that, many people became aware of my activities in racing and I was introduced as a forerunner in women’s motorcycling.

At that time, I became the one who moves in the opposite direction; a person who had achieved some accomplishments in the field of women’s sports that nobody had access to.

Q: You said you did not want to surrender, and your goal was to get women into the world of motorcycling. Did you succeed?

A: You see, I always wanted to open a motorsport school for women. On the other hand, I wanted to break the barrier of women’s entry into Azadi Stadium track, which, at the end, I succeeded with the many follow-ups I did. The next barrier that had to be broken was the lack of racing events for women. This was eventually accomplished after my several follow-ups, and in 2016 the permit to hold such competitions was issued by the Ministry of Sports.

Of course, the media and their advertisement played a very important role and finally, motor racing became an official sport for women. I myself held the first motorcycling tournament, and became the first female racing champion in Iran. In this way, I have been struggling to remove the barriers that women face. 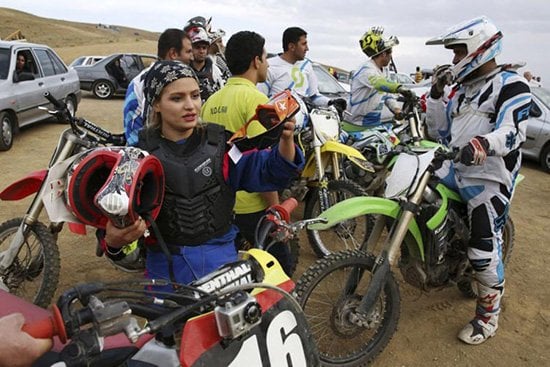 Q: What is the reaction of the Federation? Do they welcome women’s motorcycling?

A: The head of the Federation, Mr Sidanlou, supports us; his opinion is positive about women’s motorcycling.

Q: One of the things that happened recently was your trip to the United States to take part in various motorcycling rides, a trip that put you in the centre of media focus.

A: On my trip to the US I was seeking motorcycling certifications; I got both the motocross and motor race certificates.

Q: At that time you grabbed the attention of the National Geographic Network and they started to make a documentary on you.

A: The National Geographic Network wanted to come to Iran and make that documentary, but before that, there were a lot of TV channels and news agencies like BBC, CNN, Norway TV, AP, AFP and Germany’s ZDF, which all sent correspondents to Iran to file a report. However, on my trip to the United States, as the conditions were available, they came up with the report.

Q: Why is Behnaz Shafiei so important for the news outlets?

A: These media and networks do not come to me because I am a professional racer; that’s because I’m a person who fought for my own wishes and the Iranian female riders.

Q: Your trip to the US coincided with the days when Trump put Iran on the list of countries whose citizens were forbidden to enter that country. However, you attended the courses while holding Iran’s flag and then your picture went viral and had a lot of repercussions.

A: It is very simple. I want to officially eliminate the bad thoughts that exist around the world about Iran. I have now almost an international reputation, and whatever I do, would give a nice picture of Iran and Iranian women.

When I was in the US, I told the racer to come to Iran one day to see how we are racing. They told me if we came to Iran, they (the Iranians) would kill us! This is a false thinking that has been formed in the minds of many people. We can change these thoughts. It is necessary to send Iranian women to competitions abroad. I held the flag of Iran to tell them that their impressions of Iran and Iranian women are just a mistake. I made them understand that our people are intelligent and peaceful.

Q: What is Behnaz Shafiei’s only request at the current time?

A: I want to be the official representative of Iran in international competitions.