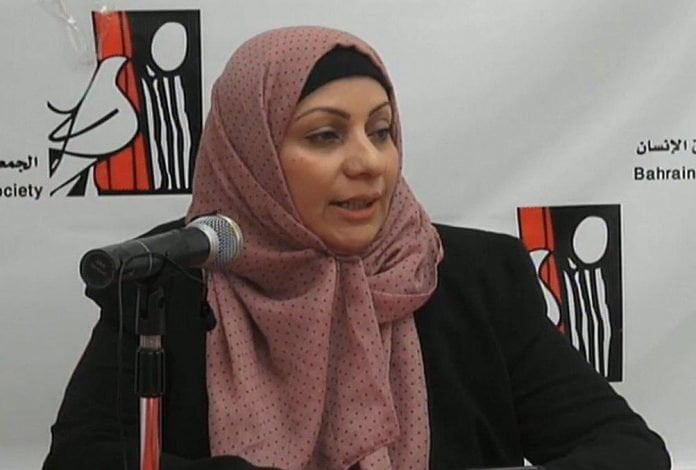 Bahraini human rights advocate, Ebtisam Al-Saegh, who was arrested on July 3 after security forces attacked her house, has gone on hunger strike since Friday night.

Reports say the Bahraini human rights defender has been brutally tortured behind bars since last week and the security forces are holding her in solitary confinement.

Al-Saegh has been seen in a life-threatening condition while being transferred to Isa Town prison telling observers, “They killed me! Spread it!”

It is feared that she would be tortured in revenge for her disclosures, and no one will be informed about it, according to a Farsi report by Atlas News.

Al-Saegh has been subjected to direct and indirect threats by al-Khalifa regime affiliates. In the wake of a wave of organized threats, which were issued by the Bahraini government agents against her on the social media, she was summoned to Bahrain’s National Security Apparatus last month.

After 12 hours of interrogation, she was admitted to the hospital because of being subjected to severe sexual and psychological harassment.

She has also submitted proven reports on murder, illegal detention, travel bans, torture, harassment and revocation of citizenship from critics of the Al Khalifa regime, and Bahraini political and legal activists.

This comes as several international organizations have shown sharp reactions to the detention of this human rights defender in Bahrain.

Amnesty International in two separate statements expressed concern over Al-Saegh’s imprisonment considering that she had been sexually harassed during interrogations.

Samah Hadid, Director of Campaigns for Amnesty International in the Middle East said Saegh’s only crime is to speak against a regime that cracks down any protest.  Hadid also said that Saegh is at risk of more torture.