Fate of humanity is not tied to nuclear deadline 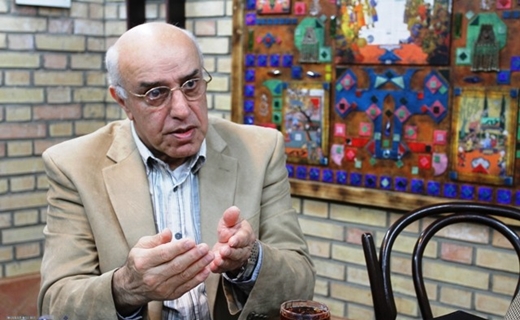 Professor Pirouz Mojtahedzadeh, an Iranian geopolitics researcher, says efforts to serve Iran’s national interests should not be put on hold because of the skepticism voiced by a few.

Professor Pirouz Mojtahedzadeh, a renowned Iranian political scientist and historian, says nuclear talks should proceed despite the challenges and obstructionist measures inside and outside the country.

Prof. Mojtahedzadeh, who is also a prominent Iranologist and geopolitics researcher, made the comment in an interview with khabaronline.ir and added that efforts to serve the country’s national interests should not be put on hold only because of skepticism voiced by a few people. The following is the translation of excerpts of his remarks:

IAEA and interview with Iranian scientists

It is not a new topic. What sounds new is that such a demand [interview with the nuclear scientists] is to be set as a precondition in the talks between Iran and P5+1 for a final agreement. It has drawn Iran’s protest. Even certain members of P5+1 expressed opposition to new demands after the Lausanne agreement in April.

What the International Atomic Energy Agency (IAEA) has asked is not new and has nothing to do with the previous and ongoing rounds of talks. The IAEA has made such a demand because it has made it clear for the Iranian government and the world that it is seeking to prove that Iran has no weapons program in its nuclear industry.

To prove this, they [the Westerners] say the areas they want should be inspected, asking for the nuclear scientists and engineers to be interviewed. Whether this demand is outrageous or legitimate, I don’t have the slightest idea. Nobody knows. It is up to Iran and the agency to hold special talks and discuss whether inspection is necessity or not. In other words, the Iranian government should ask the agency to explain why they seek to interview Iran’s nuclear scientists. […]

IAEA and its responsibility

The agency says a number of issues have remained hidden during the inspections its experts have carried out. The IAEA seeks to clarify those issues by interviewing Iranian scientists. It is clear that the one who makes a claim has to prove it by submitting compelling evidence.

The issues the agency has raised without producing the required evidence are old excuses which have been repeatedly used over the past 20 years. Nonetheless, Iran has always responded to these challenges. At this juncture, we will gain nothing if we seek to condemn somebody. We need to enter talks with the agency. The Iranian government or its representative at the IAEA should ask the agency why it wants to interview the scientists and what doubts it wants to clear up by interviewing the personnel of Iran’s nuclear industry.

Talks are proceeding despite major stumbling blocks. Talks will go ahead as before, but [US Secretary of State] John Kerry’s broken leg could complicate the situation and hamper the talks. Negotiations have started recently and different events may delay the talks. The issue cannot be assessed properly. What has happened to the US secretary of state will certainly affect the talks. […]

Those who have imposed the deadline are the ones who should do something for the time limit caused by the deadline. The [July 1] deadline is not the end of the human race; in other words, the fate [of humans] is not tied to that day [the deadline]. The one who has set the deadline can extend or change the target date. […]

The protocol is a separate case with a precedent. Signing the protocol does not have anything to do with the talks. The question of signing the Protocol and parliament’s approval of it was raised when Mr. Khatami was president. It is a separate question with no bearing on nuclear talks. If the West seeks to tie it – as a precondition – to the talks, it would be wrong. It is also the reason why certain members of P5+1 have opposed making new demands.

The course nuclear talks have taken is related to the Lausanne agreement which has said nothing about the Additional Protocol. If one country desires to go beyond the Lausanne agreement and float the protocol, with some inside Iran supposing such a desire as a life-and-death condition, they need to know that the talks are pursued under the supervision of the Supreme Leader. When he is closely watching the talks, such doubts could be questionable.

All in all, I’m still optimistic about the progress in and conclusiveness of the talks despite obstructionist measures in Iran and the US, especially measures by Israel and the Jewish lobby to hamper the efforts. The national will of the two countries wants to see the problem [Iran’s nuclear dispute with the West] settled so that the Iranian nation can free itself from the yoke of the inhumane behavior [imposition of sanctions against Iran].

The so-called Worriers need to know that the Iranian nation has clearly tasked – in the [2013] elections – the eleventh government with solving the problems the country is facing in its foreign relations.

I believe that a bright future lies ahead. I don’t know about the details. Even the negotiators cannot say exactly when they are to sign a deal. Those who set a deadline should be careful about the time limit. Those who have set it should capably try not to miss the deadline. They have said that if the intended results are not achieved by the deadline, they would think about a better timeframe.

I don’t want to say that an agreement would turn the world into a better place to live in. My stand is what I’ve repeatedly said in domestic and foreign media since the start of the new round of talks: the biggest achievement of the talks and a possible agreement is Iran’s stepping out of the deadlock. We are not to gain more than this. The plight Iran has been through makes us desire an agreement which would spell an end to that plight.

When locked in a stalemate and isolation, we cannot properly engineer a better future for the generations to come. When Iran is free from sanctions, it can more generously get big jobs done financially, legally and internationally. The agreement will lead us to nothing, but it can take us down a path which would lead to what we seek.