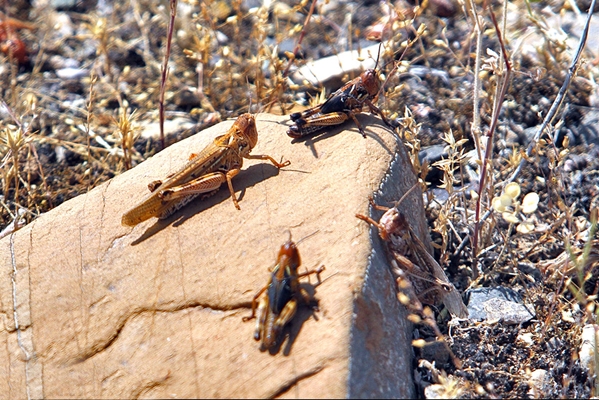 The United Nations Food and Agricultural Organization (FAO) has dispatched a delegation to Iran to discover the possible sources of the massive attack by desert locusts on parts of the country over the past days, said head of the Iranian Plant Protection Organization.

Mohammad Reza Dargahi said the UN delegation will try to find out whether the latest invasion by the desert locusts in at least six of the 31 Iranian provinces is caused by certain regional states.

He was alluding to the Arabian Peninsula, especially Saudi Arabia, where the locusts originate from.

“In the past years, regional states established good cooperation in fight against the desert locusts,” he said.

According to Dargahi, the desert locusts pose a serious threat as they keep destroying the crops on their way.

“Such locusts annually attack about 60 countries from across the world with a focus on north and east Africa,” he said.

Plaguing around 30 percent of the land in the world, the locusts descend on other areas when they run out of plants to feast on.

“In the past, locusts attacked Iran from Pakistan and India but today they are flying in swarms into Iran mainly from North Africa and the Arabian Peninsula,” said the official, adding that the latest attack in Iran has been unprecedented over the past four decades.

The Iranian official noted that the desert locusts have severely contaminated the provinces of Bushehr, Fars, Hormozgan, Khuzestan, and Sistan and Baluchestan, as well as the southern parts of Iran’s largest province, Kerman.

He also accused the Persian Gulf littoral states for remaining passive in the fight against the phenomenon.

Dargahi estimated that 200,000 hectares of agricultural land in Iran could be hit by the locusts.

“Today, only 40,000 hectares of farmland in the six provinces have been prepared for fighting the attacking swarms of desert locusts,” he said.

He warned that any failure to control the locusts would jeopardize billions of dollars in agricultural products.

The locust crisis comes as many Iranian farms have already been hit by the recent floods, increasing concerns over the country’s food security.