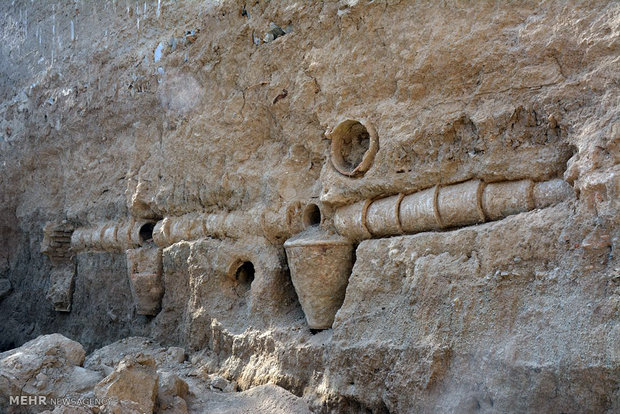 Construction works  in Iran's Borujerd led to the discovery of an ancient aqueduct system as a part of a historical castle.

An official of Lorestan’s Cultural Heritage, Handicrafts and Tourism Organization announced the discovery of water transfer installations of an ancient aqueduct during excavations in Borujer; according to a report by Mehr News Agency.

The official, Hojjat Yar-Mohammadi, said the ancient aqueduct includes a smart water distribution system as a part of a historic castle. Pottery crocks in the system cleaned up and purifid the water.

Noting that the discovered items have been documented, he said the organisation has yet to decide whether the system’s site should be kept intact, or the historical items should be taken to another place for protection.

Nothing can be said about the historic era of the discovered system. According to the official, the experts in the Cultural Heritage Organization are studying the system. A special unit is also in charge of protecting this cultural heritage.

Borujerd had two layers of protection in the past. The first included as many as 57 towers that surrounded the entire town; and the second was built inside this area of around 280 hectares, designed to protect the government castle which includes the ancient aqueduct.

The government’s castle was like a big garden inside the town with a well-designed water system. Clay pipes – Tanpusheh in Farsi – transfer the water in the system. Big pottery distributed the water and removed the mud. This helped minimizing the risk of blockage in the flow of water. What stands out about this old system is its optimal use of water resources.