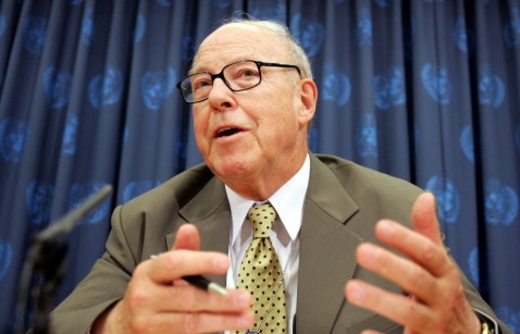 Something that worries me is that these accusations that come from foreign intelligence agencies can be utilized by states to keep Iran under suspicion, said the former IAEA director general.

In a critique of the handling of the Iran file by the International Atomic Energy Agency, former IAEA Director General Hans Blix has called for greater skepticism about the intelligence documents and reports alleging that Iran is in pursuit of nuclear weapons.

In an interview in his Stockholm apartment late last month with Gareth Porter, an investigative journalist and historian specializing in U.S., Blix, who headed the IAEA from 1981 to 1997, also criticized the language repeated by the IAEA under its current director general, Yukiya Amano, suggesting that Iran is still under suspicion of undeclared nuclear activity.

Blix, who clashed with US officials when he was the head of the United Nations Monitoring, Verification and Inspection Commission (UNMOVIC) on weapons of mass destruction in Iraq from 2000 to 2003, said he has long been skeptical of intelligence that has been used to accuse Iraq and Iran of having active nuclear-weapons programs.

“I’ve often said you have as much disinformation as information” on alleged weaponization efforts in those countries, he said.

Referring to the allegations of past Iranian nuclear weapons research that have been published in IAEA reports, Blix said, “Something that worries me is that these accusations that come from foreign intelligence agencies can be utilized by states to keep Iran under suspicion.”

Such allegations, Blix added, “can be employed as a tactic to keep the state in a suspect light — to keep Iran on the run.” The IAEA, he said, “should be cautious and not allow itself to be drawn into such a tactic.”

He warned that compromising the independence of the IAEA by pushing it to embrace unverified intelligence was not in the true interests of those providing the intelligence.

The IAEA member states providing the intelligence papers to the IAEA “have a long-term interest in an international service that seeks to be independent,” said Blix. “In the Security Council they can pursue their own interest, but the [IAEA] dossier has to be as objective as possible.”

Blix’s successor as IAEA director general, Mohamed ElBaradei, recalled in his 2011 memoirs having doubts about the authenticity of both sets of intelligence documents. ElBaradei resisted pressure from the United States and its European allies in 2009 to publish an “annex” to a regular IAEA report based on those unverified documents.

But Amano agreed to do so, and the annex on “possible military dimensions” of the Iranian nuclear program was published in November 2011. During the current negotiations with Iran, P5+1 (US, UK, Russia, China, France plus Germany) has taken the position that Iran must explain the intelligence documents and reports described in the annex.

The provenance of the largest part of the intelligence documents — the so-called “laptop documents” — was an unresolved question for years after they were first reported in 2004 and 2005.

But former senior German foreign office official Karsten Voigt confirmed in 2013 that the terrorist Iranian exile opposition cult, the Mujahedeen e-Khalq (MEK), gave the original set of documents to the German intelligence service (BND) in 2004. The group has been reported by Seymour Hersh, Connie Bruck, and a popular history of the Mossad’s covert operations to have been a client of Israel’s foreign intelligence agency, the Mossad, serving to “launder” intelligence that Mossad did not want to have attributed to Israel.

Blix has been joined by two other former senior IAEA officials in criticizing the agency for its uncritical presentation of the intelligence documents cited in the November 2011 annex.

Robert Kelley, the head of the Iraq team under both Blix and ElBaradei, and Tariq Rauf, the former head of the Agency’s Verification and Security Policy Coordination Office, have written that the annex employed “exaggeration, innuendo and careful choice of words” in presenting intelligence information from an unidentified Member State of the IAEA on the alleged cylinder at the Parchin military facility.

Blix said he is “critical” of the IAEA for the boilerplate language used in its reports on Iran that the agency is “not in a position to provide credible assurances about the absence of undeclared nuclear material and activities….”

Blix added that it is “erroneous” to suggest that the IAEA would be able to provide such assurances if Iran or any other state were more cooperative.

As head of UNMOVIC, Blix recalled, “I was always clear that there could always be small things in a big geographical area that can be hidden, and you can never guarantee completely that there are no undeclared activities.”

“In Iraq we didn’t maintain there was nothing,” he said. “We said we had made 700 inspections at 500 sites and we had not seen anything.”

Blix emphasized that he was not questioning the importance of maximizing inspections, or of Iran’s ratification of the Additional Protocol. “I think the more inspections you can perform the smaller the residue of uncertainty,” he said.