EU’s Will to Preserve JCPOA in Contrast with Companies’ Withdrawal: Iran

In a Sunday meeting with EU Commissioner for Energy and Climate Miguel Arias Canete in Tehran, Zarif underlined that after the US pullout from the Iran nuclear deal, the EU is expected to preserve the JCPOA’s achievements mote than ever.

“Under the current circumstances, the EU’s political will is not enough to preserve the nuclear deal. The EU needs to take more practical strides and increase its investments in Iran if it is to continue its economic cooperation with the Islamic Republic,” he said.

For his part, the EU Commissioner said today the European states’ unity to keep the achievements of the Iran nuclear deal has gained significant importance in the wake of the US withdrawal from the 2015 deal.

He further noted that the EU is resolved to keep the Iran nuclear deal and help European companies maintain their cooperation with the Islamic Republic. 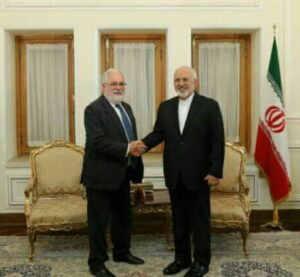 “The US withdrawal from the JCPOA has created problems for the EU but the message of the bloc to Iran is that it is seeking to continue cooperation with Iran and preserve the nuclear deal,” he noted.

Despite the tough diplomatic efforts, the chances of the Iran nuclear deal surviving the impact of US sanctions were dealt a blow when the Danish shipping group A P Moller-Maersk said it was joining an exodus of companies ceasing commercial activity in Iran.