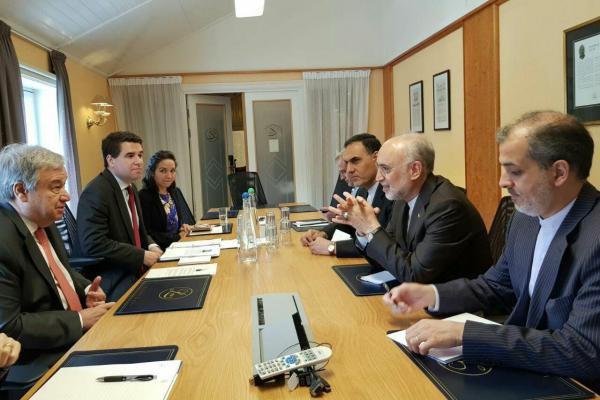 Ali Akbar Salehi, the Head of the Atomic Energy Organisation of Iran (AEOI), has cast doubt over the future of the Iran nuclear deal, saying the proposals put forth by the EU to convince Iran to remain in the nuclear deal are not strong enough to meet the Islamic Republic’s expectations.

In a meeting with the Secretary-General of the United Nations António Guterres in Norway, Salehi said given the fact that the Europeans’ proposals have not met Iran’s expectations, it is not clear whether or not the JCPOA could be preserved.

According to a report by Fars News Agency, Salehi also underlined that the benefits of the JCPOA for the Islamic Republic of Iran in banking, economic and trade areas have been much lower than its expectations.

He also called on the remaining sides of the nuclear deal and the UN to explicitly support the JCPOA and stand against the US policies.

Salehi highlighted the Islamic Republic’s capabilities particularly in domestic and regional areas and said the US policy of standing against Iran and trying to return the country to its pre-1979 approach to follow the US in all areas is doomed to failure.

He then described the current situation of the Middle East as dangerous and warned against the negative consequences of the situation for all regional states.

The UN chief, in turn, described Iran’s political and economic expectations from the EU as natural and said he would urge the remaining sides of the JCPOA to meet Iran’s demands as soon as possible.