Two European sculptors taking part in the 8th Tehran International Sculpture Symposium, currently underway in the Iranian capital, have expressed satisfaction with the unique quality of the convention, calling it a wonderful event which is among the best ones worldwide.

German and Romanian sculptors, Klaus Hunziker and Ana Maria Negara, who are taking part in the 8th Tehran International Sculpture Symposium (April 21-May 15), currently being held at Milad Tower in the Iranian capital, have praised the high quality of the event, calling it a professional seminar.

According to a Farsi report by the Honar Online News Agency, these days, 19 sculptors and 10 students of this branch of visual arts are creating sculptures in the 8th Tehran International Sculpture Symposium at Milad Tower, to be installed or put on display in urban spaces.

Like the past four editions, artists are using stone as the main material in making their sculptures in the present edition of the symposium. Artists from four corners of the world, who have sufficient experience in carving sculptures out of stone, have convened in Tehran to create remarkable artworks to be installed or showcased in urban areas and teach Iranian sculptors how to improve their skills in working with stone as their main sculpture material.

Speaking to Honar Online, Hunziker said prior to taking part in Tehran symposium, he had participated in 13 similar international conventions.

Commenting on the Iranian symposium, he noted, “Although it is just the eighth edition of the event, everything about it is magnificent. I have only taken part in one symposium on a par with the Iranian convention in terms of quality, which was held in the US. However, even there, the sculpting tools we were provided with were second-hand. Whereas, here in Tehran everything is new and absolutely clean. In addition, safety principles are observed very well in this symposium. Quite interesting to me is that this is for the first time that we [sculptors and trainees] have been provided with special uniforms in an international symposium.”

On the general atmosphere of the eighth edition of the symposium, he said, “This is the first time that I am in Iran and experiencing how it feels like being in the country. Nevertheless, I have to admit that up to now, everything has been wonderful. The event has been held in the best possible way. We have had no worries. Furthermore, the opening ceremony was held quite professionally.”

He said all those who play a role in holding the symposium are making a significant contribution to the better creation of the works, adding even the assistants are very professional and performing their responsibilities very well.

“We have a very good relationship with the students. I have never taken part in an international event of the same kind which has been on a par with Tehran symposium.”

Expounding on the sculpture he is making at the symposium, Hunziker said his artwork – titled “It Will Be Released like a Bird” – has a general concept which is composed of two parts and two more specific concepts.

“A part of the work is static which conceptualises stability. In fact the first concept of my work of art aims to raise a question. However, the work’s second concept depends on the audience’s interpretation which can be very different from the first one.”

Commenting on the same event, Negara said Tehran symposium is one of the best sculpture events worldwide.

“I, honestly, believe that this convention is among the bests worldwide due to its efficient and sound management. In fact, it has always been a dream of mine to take part in a symposium which is managed excellently. My participation in this event is a dream coming true for me, as all the required facilities have been provided appropriately and the symposium is well-ordered and has an effective discipline. I really enjoy taking part in it.”

She added, “Iranian artists are very good and display a very friendly behaviour. I believe Iranians are very good and pleasant. I am proud of my assistant who is an Iranian student. Up to now, a friendly atmosphere has pervaded the entire symposium. Everything has been perfect for me.”

Elaborating on her work titled “Human Evolution” which is being made in this event, Negara, who has the experience of taking part in 12 international symposiums, said the artwork stresses, more than anything else, the human being’s evolution.

“In fact, I intend to depict human growth in my work and raise a number of questions.”

She said a friendly atmosphere prevails Iran, adding, “I feel at home in Iran because I feel comfortable in it. Of course, this is the first time I am in Tehran and taking part in this symposium. Nevertheless, so far, everything has been very good for me. I am very happy to be here in the Iranian capital.”

She stressed that she, very much, likes to have the chance to visit Iran’s tourist sites and historic places, such as mosques and museums, and be able to gain further knowledge about Iranians’ traditions and religion to better understand the country’s culture.

“This will make me postpone my travel back to Romania to spend more time in Iran.” 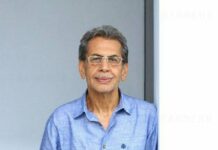 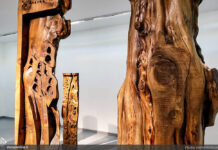 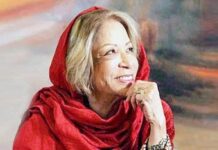