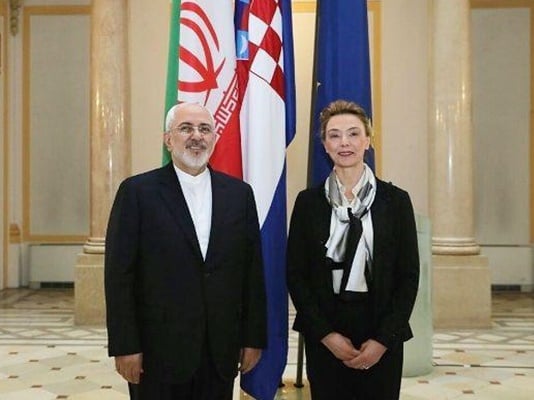 In the Thursday meeting held in Zagreb, Pejčinović expressed Croatia and Europe’s full backing for the implementation and maintenance of the Iran nuclear deal, describing the JCPOA as one of the most significant and robust agreements of its kind.

She said the deal laid the groundwork for further cooperation between Iran and other countries around the world.

The Croatian foreign minister said Tehran and Zagreb have had age-old and strong relations over the years, and hailed Zarif’s trip to her country as an opportunity to further boost reciprocal political and economic relations.

“Good agreements were signed during the Croatian president’s trip to Iran, and your presence here along with an important economic delegation is a sign that those agreements are going into force,” she said.

The Iranian foreign minister, in turn, emphasized Tehran’s determination to promote mutual cooperation in all areas and work towards the implementation of the agreements reached during his visit to Croatia.

The two top diplomats further reviewed bilateral relations in all political, economic and cultural areas as well as the agreements already clinched during trips by the officials of both countries. They also highlighted the need to further enhance mutual ties on all fronts.

Also high on the agenda of the talks were key regional and international issues, including the JCPOA and fighting violence, terrorism and extremism all around the world, the crises in Syria and Yemen, and the current situation in Afghanistan and the Balkans.