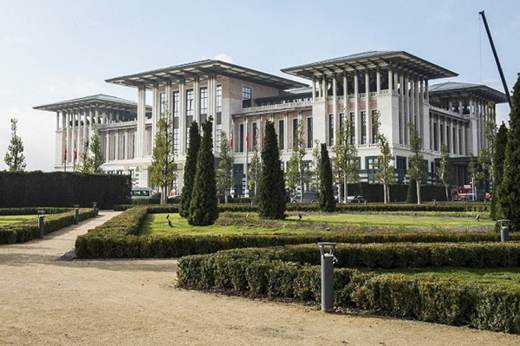 October 29 marked the day the Turkish Republic was founded. President Recep Tayyip Erdogan held a reception in the new presidential palace to celebrate the 91st anniversary of the Republic. Iran’s ambassador to Ankara attended the ceremony. Tabnak news site quoted Ambassador Alireza Bigdeli as writing the following on his Facebook page after his meeting with the Turkish president:

“Today is Turkey’s Republic Day. In the morning we went to Ak Saray, the new presidential palace [on the outskirts of Ankara], to congratulate President Erdogan [on Republic Day]. I was thinking about the striking resemblance between the architecture of this palace and that of Alighapoo in Isfahan. Surprisingly a fellow ambassador [present at the ceremony] said, “This structure reminds me of Aliphapoo in Isfahan.”

[The word “Ak,” at the beginning of “Ak Saray” which means “White Palace” in English is a play on the name of Turkey’s ruling Justice and Development Party (AKP) which is known to its followers as the A.K. Party.]

Caption: Alighapoo is a grand palace in Isfahan, central Iran. It is located on the western side of Naqsh-e Jahan Square opposite to Sheikh Lotfollah Mosque. The name Alighapoo, from Arabic Ali, “Imperial”, and Turkish Ghapoo meaning “gate”, was given to this place as it was right at the entrance to the Safavid palaces which stretched all the way from the Naqsh-e Jahan to Chahar Bagh Boulevard.