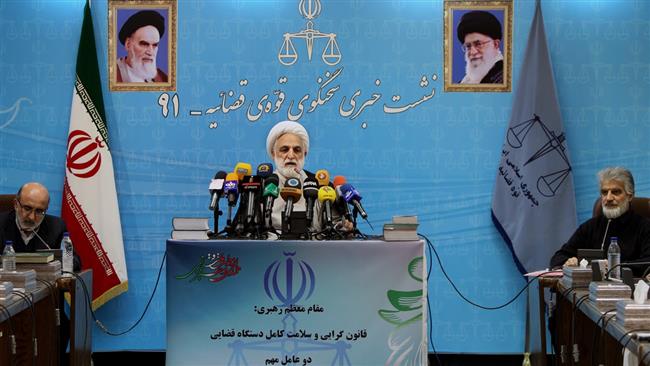 Iran’s Judiciary spokesman says the country’s enemies may have been involved in orchestrating an attack carried out against the Saudi Arabian embassy in the capital, Tehran, earlier in the month.

Speaking at a press conference on Sunday, Gholam Hossein Mohseni-Ejei said, “There are implications and evidence that the enemy has used some simple-minded elements in [bringing about] the violation against the Saudi embassy.”

Saudi Arabia severed diplomatic relations with Iran on January 3 following demonstrations held in front of its embassy in Tehran as well as its consulate in the northeastern city of Mashhad by angry protesters who were censuring the Al Saud family for executing top cleric Sheikh Nimr al-Nimr a day earlier. The cleric was an outspoken critic of Riyadh’s policies.

Some of the protesters did not have criminal intent and had simply amassed in front of the embassy building outraged by the execution, Mohseni-Ejei said, adding that those demonstrators numbered close to 200. “Some [others] are suspected to have entered the embassy with the intent to cause fire and destruction or have had the enemy infiltrated among them, [a likelihood] that is under investigation.”

The official said around 100 people have been arrested in relation to the embassy attack; a number of them, he said, have been released.

One individual has been arrested outside the country in connection with the case, Mohseni-Ejei said, adding that several people had entered the building on his orders. “Investigations are underway to see whether he and his agents are to blame for all the destruction or not.”

The official also denounced Riyadh’s response to the incident as overreaction, asking the Islamic Republic’s authorities to respond proportionately.