Ebtekar: I think President Rouhani knows how to play chess 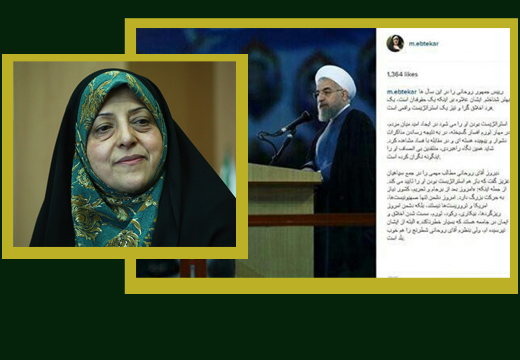 Iran’s environment chief says she thinks President Rouhani can masterfully play chess because he is a strategy-minded individual.

The director of the Environment Protection Organization has said that President Rouhani is a lawyer, ethical person and a real strategist.

This is the caption Masoumeh Ebtekar put on a picture of President Hassan Rouhani on her Instagram page, saying that she has gotten to know the president better over the years. The following is the translation of what the Islamic Republic News Agency (IRNA) quoted the environment chief as writing on her page on September 17:

Masoumeh Ebtekar wrote, “I got to know the president better over time. In addition to being a lawyer, the president is a real strategist and an ethical individual. ”

She went on to say that the president is a strategist and that is clearly evident in his efforts to instill a sense of hope among people, curb the runaway inflation, render complicated nuclear talks conclusive and counter corruption. Perhaps this strategic approach of the president has concerned his unfair critics, she added.

Ebtekar further said, “On Tuesday Mr. Rouhani made important comments in a meeting with the dear [members of the Islamic Revolution] Guard corps. His remarks confirm the fact that he is a strategist.

“Remarks such as ‘After [the conclusion of] the Joint Comprehensive Plan of Action and [removal of] the sanctions, the country needs to take a big step. Today the Zionists, the US and terrorists are not the only enemies [of Iran]; rather, the questions of dust particles, unemployment, recession, inflation, the weakening of ethical norms and faith are our enemies in society which are very dangerous’.

“I have not asked the president, but Mr. Rouhani seems to know how to play chess [and have a good command of chess strategies]” prove that he has a strategist’s mind.