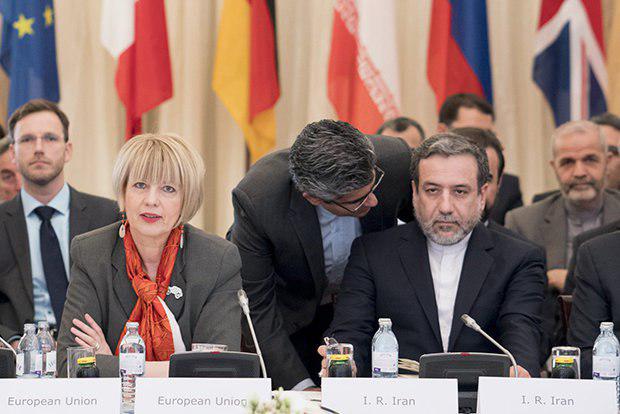 The E3+2 group of countries (UK, France, Germany, Russia and China) have, in a statement, vowed to continue supporting the Iran nuclear deal and doing business with the Islamic Republic despite the US sanctions to be re-imposed in coming months.

The statement was released on Friday after a meeting of the JCPOA Joint Commission held in Vienna, Austria. The meeting was held at the request of Tehran to review the implications of the withdrawal of the United States from the Iran nuclear deal and discuss the way forward to ensure the continued implementation of the deal in all its aspects.

What follows is the full text of the statement released by the Coordinator of the joint commission:

A meeting of the Joint Commission of the Joint Comprehensive Plan of Action (JCPOA) took place in Vienna on 25 May 2018 upon the request of the Islamic Republic of Iran in order to review the implications of the withdrawal of the United States from the JCPOA and discuss the way forward to ensure the continued implementation of the deal in all its aspects.

Under the terms of the JCPOA, the Joint Commission is responsible for overseeing the implementation of the nuclear deal.

The Joint Commission was chaired, on behalf of EU High Representative Federica Mogherini, by EEAS Secretary General Helga Schmid and, following the withdrawal of the United States of America from the JCPOA, was attended by the E3+2 (China, France, Germany, Russia, United Kingdom) and Iran at the level of Political Directors/Deputy Foreign Ministers.

The International Atomic Energy Agency (IAEA)’s Director General Amano was present at the beginning of the Joint Commission against the background of the 11th report by the IAEA which had just been issued. The participants welcomed the fact that the IAEA has again confirmed the continued adherence by Iran to its nuclear-related commitments. They also commended the professional and impartial role played by the IAEA, the only body charged with the monitoring and verification of the implementation by Iran of its nuclear-related commitments under the JCPOA and UN Security Council Resolution 2231 (2015)

Participants regretted the withdrawal of the United States from the nuclear deal and the announced re-imposition of US sanctions lifted under the JCPOA. The JCPOA is a key element of the global non-proliferation architecture and a significant diplomatic achievement endorsed unanimously by the UN Security Council in its Resolution 2231.

The Joint Commission meeting provided the opportunity to address the unilateral withdrawal of the United States and its consequences, to discuss the way forward, and the continued implementation of the JCPOA with regard to nuclear and sanctions lifting-related commitments, as well as Procurement Channel matters and civil nuclear cooperation.

Participants recalled their commitment to the continued, full and effective implementation of the JCPOA, in good faith and in a constructive atmosphere, and recognised that the lifting of nuclear-related sanctions allowing for the normalisation of trade and economic relations with Iran constitute essential parts of the JCPOA.

Participants reviewed the potential impact of the re-imposition of US sanctions following a meeting of the Working Group on the Implementation of Sanctions-Lifting, which was convened the day before.

In this regard, participants discussed common efforts with a view to practical solutions concerning the following issues within the next few weeks: maintaining and deepening economic relations with Iran; the continued sale of Iran’s oil and gas condensate petroleum products and petrochemicals and related transfers; effective banking transactions with Iran; continued sea, land, air and rail transportation relations with Iran; the further provision of export credit and development of special purpose vehicles in financial banking, insurance and trade areas, with the aim of facilitating economic and financial cooperation, including by offering practical support for trade and investment; the further development and implementation of Memoranda of Understanding and contracts between third-countries companies and Iranian counterparts; further investments in Iran; the protection of economic operators and ensuring legal certainty; the further development of a transparent, rules-based business environment in Iran.

These efforts are aimed at preserving the interests of businesses and investors engaged with Iran. Participants noted that economic operators pursuing legitimate business with Iran were acting in good faith based on commitments contained in the JCPOA and endorsed at the highest level, unanimously by a UN Security Council Resolution.

Participants stressed their commitment to work to ensure that these benefits would continue to be delivered and agreed to this end to deepen their dialogue at all levels, including at the level of experts with a view to finding practical solutions to these problems.

Participants agreed to intensify their ongoing work in the Joint Commission and all its bodies in the format of E3/EU+2 and Iran, in particular the Working Group on the Implementation of Sanctions-Lifting.

As a next step, Iran proposed a Ministerial meeting of the Joint Commission.