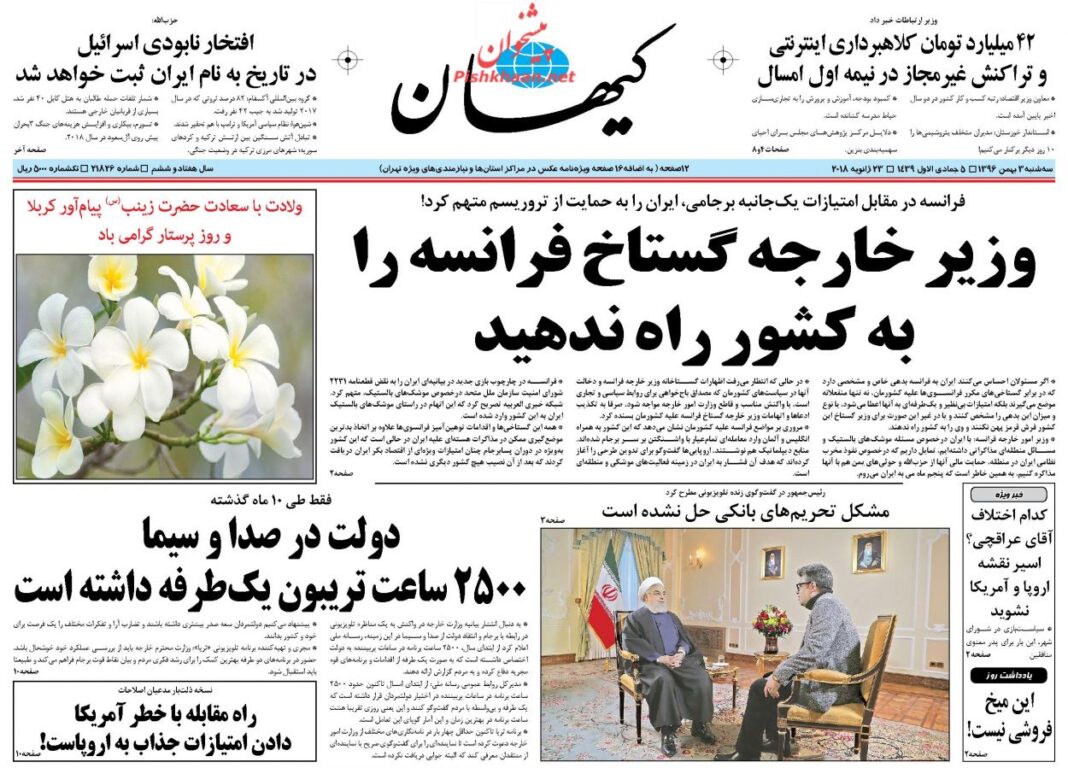 An Iranian conservative newspaper says the French foreign minister has made rude remarks about Iran and, hence, must not be allowed to enter the country.

In an editorial piece on Tuesday, the conservative daily newspaper Kayhan wrote:

If Iranian officials feel the reason Iran has adopted a passive stance vis-à-vis Paris’ impudence and is offering unique and unilateral concessions to France is that Tehran is beholden to French authorities, well, they (Iranian officials) should either make it clear why the Islamic Republic is indebted to France, or stop rolling out the red carpet for Jean-Yves Le Drian, the rude French foreign minister, and not allow him to enter Iran.

In brazen comments, the French minister told Le Figaro that France has held talks with Iran on the issue of ballistic missiles as well as regional issues, but that Paris also would like to hold talks on Iran’s “destructive” military influence in the region as well as its financial support for Hezbollah and Yemeni Houthis, and “that’s why I’m going to Iran on March 5.”

He has also claimed that the Iran nuclear deal prevents Tehran from developing atomic weapons, something that, in his words, could have had catastrophic consequences for regional balance. The top French diplomat said giving assurances means there should be a framework for Iran’s ballistic missiles, and, as he said, this is the same thing required by UN Security Council Resolution 2231. He noted if Iran wants to return to the international community, it should cooperate on the issues just mentioned. Otherwise, the foreign minister claimed, Iran will, logically enough, always be suspected of developing nuclear weapons.

Earlier, too, he had talked about his upcoming trip to Iran with the same rude and insulting tone. He said in a meeting with his US counterpart Rex Tillerson that if Iran’s missiles prove to be dangerous, separate sanctions must be imposed on the country.

He claimed there are three issues as far as Iran is concerned: talks on nuclear issues, Tehran’s ballistic missiles and Iran’s desire for domination over the whole region!

The Iranian Foreign Ministry was expected to show a firm reaction to Le Drian’s rude remarks and France’s interference in Tehran’s policies, which is an example of seeking concessions in return for political and trade ties. However, the ministry, which had recently issued an inflammatory and strongly-worded statement against Iranians who are critical of the Iran nuclear deal, settled for denying the French foreign minister’s allegations and accusations against Tehran. The ministry also stressed that Iran has not had, and will not have negotiations with any country on its defense and missile programs.

By reviewing Paris’ positions against Iran, we can understand that France, Britain and Germany have entered into a full-scale deal with the US over the Iran nuclear deal.