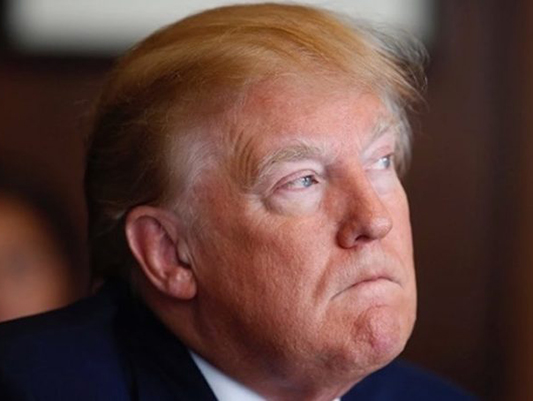 A political analyst says Trump pretends to be a lunatic like Nixon while seeking a new cold war like Kennedy.

Legal expert Mohsen Baharvand has, in an article published by he Persian-language Etemad daily, weighed in on the characteristics of US President Donald Trump and his attempts to besiege countries with an iron wall. The full text of the article follows.

Trump is not crazy. He crazily seeks to save the United States. Without a cold war, the US will be hit by a terrible downfall and will lose its global leadership. Washington’s actions should not be seen only within the context of regional equations and the Iran nuclear deal. It seems that in addition to regional motives to create security and support the Israeli regime and gain access to Saudi Arabia’s dollar reserves, global strategic motives lie behind these actions. Such an international way of thought does not emanate from Trump’s way of thinking. Rather, it must have logically come from the thoughts of strategists whose planning goes way beyond that of Trump. Behind Trump’s not-so-acceptable and not-so-logical actions lies a doctrine which can be regarded as the revival of the cold war in order to save the US. Trump’s doctrine is in fact a return to the past and a mixture of the old doctrines of the US president. This doctrine of Trump is an amalgamation of Monroe, Nixon and Kennedy’s doctrines. Trump chants the slogan of “America first” like Monroe, pretends to be a lunatic like Nixon and powerfully seeks a new cold war like Kennedy.

If we look at the map of the world, we see that Trump is seeking to erect a new iron wall around Russia and China. The only difference is that Trump seeks to tighten the wall around them. Iran is the only place where he has lost all hope. The wall used to stand on Iran’s northern borders and the coast of the Caspian Sea, but now it has been transferred to southern Iran and the southern coasts of the Persian Gulf. The US seeks to lay siege to China from the South China Sea, India and Afghanistan. Afterwards, the US wants to extend that wall by putting pressure on Pakistan and going all the way to Saudi Arabia to other areas in the Middle East to occupied Palestine to Egypt. The White House also tries to regain from Russia what was once the sphere of the Soviet influence and had weakened the iron wall. India, Iraq and Egypt are among those countries. By the same token, efforts to gain domination over Syria can be explained as well. The situation was the same in Eastern and Northern Europe until Russia showed reaction in Ukraine. In this global campaign, the US has suffered the most losses in Iran, and this infuriates Washington more than anything else. Barack Obama, Trump’s predecessor, pursued the same objective via a different approach. However, Obama did not believe in an aggressive method and tried to advance Washington’s goals through softer approaches. He did not believe in using hard approaches. He even sought to talk Iran into getting into his circle of siege.

This was the same thing that Leader of the Islamic Revolution Ayatollah Seyyed Ali Khamenei described as “an iron hand in a velvet glove.” As already mentioned, all those measures were aimed at maintaining the United States’ superiority. The Americans have probably been convinced that Obama’s method was not enough. So, Washington is openly seeking a cold war in order to survive. Trump needs to build walls and he needs a serious rival. Maybe one thing was mostly ignored in Barack Obama’s method, but the current US team is completely feeling its danger, and that is “China’s growing trade influence.” From the current US team’s standpoint, China and, to some extent Russia, would have overcome the United States had Obama’s approach continued. What Trump is doing is, in fact, making efforts to save the US and secure its share of the global market. Imagine what will happen if China’s trade continues to grow on world markets at the current pace in the next 10 to 20 years. In that case, the United States will have a tiny share, even in its own domestic market. On the other hand, China and Russia, which are aware of these developments, are intentionally trying to refrain from entering Washington’s game and maintain the previous trend. They, especially China, prefer to be friends with and overcome the US through trade superiority. China, in particular, knows that if it gets engaged in direct confrontation with the US, it will lose a major part of the market for Chinese-made goods due to Washington’s political leverage, not economic advantage.

Like China, Russia, too, still prefers to avoid a direct standoff with the US. Following the collapse of the former Soviet Union, Russia needed a long period of rest and calm to focus its attention on trade and development rather than arms production. During the tenure of President Dmitry Medvedev, Russia made every effort to achieve this end with the West’s cooperation. However, Russia was a target close at hand; so, the issue was hijacked and Moscow’s optimistic scenario failed and only emboldened the US. Washington knows well that if the Kremlin finds some breathing room, and if China continues the current trend, the US will, economically speaking, turn into a second-rate country sooner or later. Famous American intellectuals have the same idea, too.

Therefore, one can logically come to the conclusion that Trump’s America does not have much opportunity, and will move forward until it can drag Russia and China into the new cold war. If we accept these assumptions as true, then we should also accept that firstly, the US will extremely increase pressure on countries around China and Russia, namely Iran, in order to provoke them. And secondly, Washington’s measures will not be limited to the Iran nuclear deal and the Middle East region. Also we can conclude that China and Russia will resist and will try not to get involved in this game. As a result, they will not show serious reaction to the pressure around them any time soon. Another conclusion which can be drawn would be that Russia and China still optimistically think that Washington’s moves will be limited to the countries around them. Nevertheless, given what was said above, if they do not resist, the US will continue to ratchet up the pressure in order to reduce their share of the global trade and politics via confrontation and bullying, or to expose them to sanctions or unfair economic rivalry to make them enter direct competition. China and Russia’s indifference or lack of reaction to US actions vis-à-vis the countries around them is regarded as a strategic mistake.

I believe Iran should take three points into consideration in its planning. First, it should take the danger and power of the US seriously. We should get to know the real power of the enemy and make plans accordingly to counter it. Second, the US confrontation with Iran is not only bilateral and regional. Third, Iran should not shoulder the task of confronting the US all alone. This is a global issue and all countries exposed to the dangers of US actions should deal with the issue more seriously and play a part. In my estimation, this confrontation is not only a bilateral or regional one involving Iran and the US, but Iran, intentionally or unintentionally, is regarded as part of a global strategy and a key player in a major game. If Iran sees confrontation with the US as a bilateral or regional issue, and pays the price for it alone, and seeks to create a balance of power in the region on its own, it will be an arduous and costly task. Iran also needs to create a balance of power in the region in order to promote its independent regional objectives. Beyond the Persian Gulf, petrodollars and Washington’s military prowess stand ready, and on this side of the Persian Gulf Iran is standing alone only with reliance on the power and faith of its youth and domestically developed technology. This is something to be proud of. But it is no reason for other countries which are the targets of US actions not to play a role in creating a balance of power in the Middle East and Persian Gulf because they may have to pay a higher price  in the long run. They should increase their cooperation with Iran and counterbalance the United States’ weight in the regional balance of power.