Disguised as a Boy, Iranian Girl Sneaks into Football Stadium 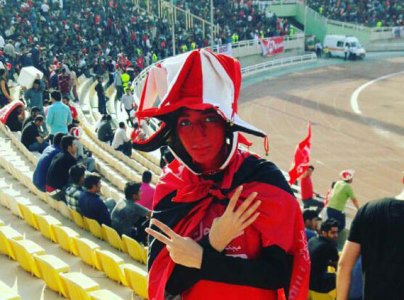 An Iranian girl, who attended a recent football match between Perspolis and Esteghlal Khuzestan, believes that girls’ presence among the fans can create a calm atmosphere in stadiums.

Zeinab is a girl who disguised herself as a boy to appear among the football fans in Ghadir Stadium in southwestern Iranian city of Ahvaz. It is an illegal and very dangerous thing to do by a 20-year-old girl; especially given the violent commotion in football games. She published some photos of herself among the fans on the Internet after the match.

Here is IFP’s translation of Khabar Online’s interview with her:

Please, introduce yourself before we go on with the interview.

I am Zeinab, 20, from Ahvaz and I got my high school diploma in Science. I have a strong liking to take coaching courses to fulfil my future plans. I have been a big fan of Perspolis FC since I was a kid.

Now let’s talk about your presence in the stadium. Did you know that it was illegal and it could put you in trouble?

It was actually my third time. I took the risk because I love football and Perspolis, so when I’m doing it, I don’t think about the possible troubles.

Tell us about your trick! How did you do it that no one realized you were a girl?

I called my father in the morning of the game and let him know. At first he was worried that we would be exposed; however, when I told him that I would dress up in boys’ clothes and paint my face, he accepted and together we went to the game. I think I’m getting professional in it!

Didn’t anyone among the spectators realize that you were a girl? Not even the guards?

The guards didn’t become suspicious at all and we entered the stadium without any problems. However, almost all the fans close to where I was sitting knew me because for a very long time I have been an active member on the pages of Perspolis fans. In efforts to sustain us, they would come and say, “There is no need to worry or panic; you’re like a member of our own families.”

When the referee blew his whistle for a foul on Perspolis defender, many of the fans started to cry out swearwords. The interesting point was that those who knew I was there immediately told their friends that there was a girl in the stadium and asked them to behave. Everything changed; they even apologized to me.

How did you get so much close to Perspolis? I think you are one of the most well-known fans in Iran. Many people know you, especially from Instagram.

It’s been a long time since I’ve been doing these things for Perspolis. When the team comes to Ahvaz, not only I welcome them at the airport, but also print banners and give them to the boys of the group to take them to stadium.

I believe that girls’ presence in stadiums can definitely bring peace and calmness to the atmosphere of our football venues.