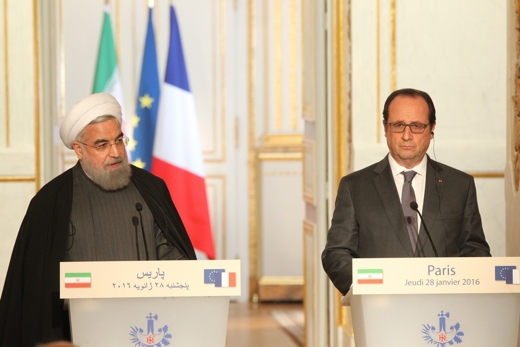 Iranian President Hassan Rouhani says the issues in the region can be solved through a diplomatic and logical approach.

In a Thursday presser with his French counterpart Francois Hollande in Paris, Rouhani said the diplomatic process that culminated in last July’s deal on the Iranian nuclear issue should serve as a model in efforts to address other issues of international significance such as the crisis in Syria.

The Iranian president further said it is up to Syrians to decide their political future, calling on other players to avoid interference in the country’s affairs and merely assist the Arab nation to resolve the crisis on its own.

“The main problem in Syria is not such and such person, the main issue is terrorism and Daesh,” said the Iranian president, criticizing the foreign parties that fuel the crisis in Syria by arming the terror groups and being involved in illegal oil trade with them.

Hollande, in turn, said Iran and France have agreed to make efforts to protect the cultural heritage of war-torn Iraq and Syria from destruction.

The French head of state further highlighted the role of Iran in the political process aimed at resolving regional crises.

He noted that Iran and France “share responsibility” for fighting terrorism which he said is threatening “regional countries, including Iran.”

“Terrorism is our sole enemy,” he said, adding that terrorism threatens human beings of every religious belief.

Referring to ongoing crisis in Syria, Hollande said it was “urgent to implement humanitarian measures and to negotiate political transition.”

Earlier in the day, Rouhani sat down for talks with Hollande after his meeting with the country’s senior executives and businessmen.

Rouhani was officially welcomed by the French leader at the Élysée Palace in Paris.

Also on Thursday, Rouhani and Hollande oversaw the signing of several memoranda of understanding between Iran and France in various sectors, including telecommunications, environment, tourism, agriculture, higher education and transportation.

In a landmark deal, Iran agreed to buy 118 Airbus aircraft worth about $25 billion.

“The sky has brightened for Iranian passengers, and Airbus is pleased to welcome the return of Iran to the international civil aviation community,” Airbus boss Fabrice Bregier said after signing the memorandum.

The agreement to purchase 73 long-haul and 45 medium-haul planes, covers “new aircraft orders and a complete package of cooperation in the civil aviation sector,” according to an Airbus statement.

Iranian Foreign Minister Mohammad Zarif was also on Thursday welcomed by his French counterpart Laurent Fabius at the French Foreign Ministry, where the two signed a set of cooperative agreements.

Zarif and Fabius signed a set of letters of intent on political dialogue between Iran and France and the establishment of business council.

The two ministers also discussed a wide range of issues including Middle East crises and monitoring of implementation of Iran’s nuclear agreement with world powers.
On January 16, Iran and the five permanent members of the UN Security Council – the United States, Britain, France, Russia and China – plus Germany started to implement the nuclear agreement they had reached in July 2015.

After JCPOA went into effect, all nuclear-related sanctions imposed on Iran by the European Union, the UN Security Council and the US were lifted. Iran, in return, has put some limitations on its nuclear activities.