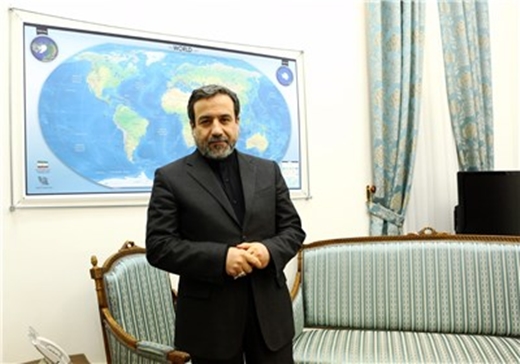 I personally see no immediate prospect for the establishment of diplomatic relations between Iran and the US, said Araghchi.

Differences between Iran and the US are too serious, deep-rooted and long-lasting to be settled easily, Iran’s Deputy Foreign Minister Abbas Araghchi said.

“We have fundamental differences with the US over regional issues, those related to the hegemonic system, and many other subjects,” Araghchi said in an interview with Al-Alam Arabic-language news network on Sunday.

“I personally see no immediate prospect for the establishment of (diplomatic) relations between Iran and the US,” the senior diplomat noted.

Araghchi, also a senior negotiator in nuclear talks with P5+1 said that the nuclear issue was only one of the numerous gaps between Tehran and Washington.

Though the nuclear issue will be somehow resolved, other serious issues will remain in place, he added.

Iran and P5+1 finalized the text of a lasting agreement on Tehran’s nuclear energy program in Vienna, Austria, on July 14. Later, the 15-memebr United Nations Security Council unanimously passed a resolution endorsing the text of the deal.

According to the resolution, seven previous UN resolutions on Iran will be terminated when the International Atomic Energy Agency (IAEA) submits a report to the council verifying that Iran has implemented certain nuclear-related measures.

Araghchi also said Iran has made it clear in the nuclear talks that none of the IAEA inspectors visiting Iran should be American.

“The Vienna deal (JCPOA) also stipulates that the inspectors that the agency (IAEA) will assign to conduct inspection in Iran should be from countries with which Tehran has diplomatic ties. Hence, the presence of American inspectors (in Iran) even in the future is out of the question,” he pointed out.