Daesh will fade into history, Daeshism will live on 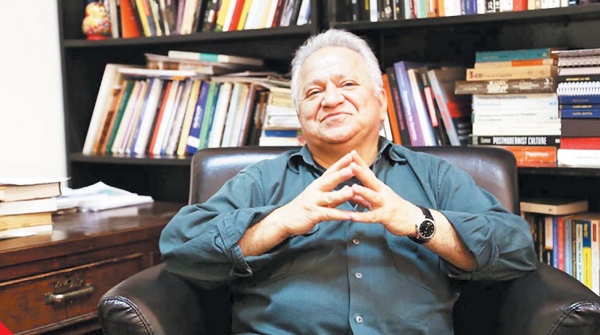 Professor Abbas Vali, a Turkish theorist, has said that one day Daesh will be part of history, but its legacy – Daeshism – will live on.

The Turkish theorist – who is also the head of the Department of Sociology at Bogazici University in Istanbul – says that Daesh [the Arabic term used for ISIL] has emerged from the depths of endless political violence, which is bare and systemicin the region.

The following is a summarized translation of the interview. The first part offers a general analysis of the situation in the Middle East and the second part entails the professor’s views on Turkey’s domestic issues and an assessment of the performance of President Recep Tayyip Erdogan’s government as far as the Middle East is concerned.

The following is the Part One of the Interview:

At the 11th International Conference on the European Union, Turkey, the Middle East and the Kurds, you referred to political legitimacy and crisis which are two interrelated terms. Do you think the multilayer legitimacy crisis can still apply to the situation in the Middle East?

Yes. If we take a look at the Middle East’s history, especially after the Arab Spring, we realize that the political crisis in the Middle East has entered a new phase.

What do you mean by a new phase?

I mean the quality of the crisis, its players, and the possible outcomes of the roles of these players have changed. The Arab Spring – which was sparked by a democratic protest in Tunisia and spilled over into Egypt – stemmed from a chronic crisis of political legitimacy in these countries, because political legitimacy had turned into legality of power, facing challenges even in its diminished form. […]

Facing a legitimacy crisis, the protesters and those who sought regime change seemed satisfied with constitutional changes which envisioned political openness and the democratic run of the country. […]

Following the [political] changes in Egypt, failure to achieve positive results and the comeback of dictatorship, the opponents of [former dictator Hosni] Mubarak realized that their problems will remain unresolved if they stick to the legitimacy crisis and reformist demands, and that the crisis is deepening there.

Your look at the situation in the Middle East reminds us of [Giorgio] Agamben’s State of Exception.

As for Agamben, his study [State of Exception] which stems from Carl Schmitt’s [legal] theory refers to a state of crisis and collapse when a power emerges and transcends the rule of law in order to restore order and enforce the previous law based on new principles. […]

Agamben excludes exception from the decisions of an individual or institution and bases it on the dialectical framework of a conflict between law and violence. It is true that in the democratic [peace] theory, law is placed against violence – law will not be enforced in the absence of violence if this relationship is looked at through a dialectical framework – and violence is found inside the law. When the law becomes toothless, violence emerges, suspends the law and then reestablishes order.

Can the Middle East situation be analyzed through this prism?

It is not the case in the Middle East. A sovereignty crisis has existed there and the political power which has been mentioned in the constitution has lost its ability to produce political supremacy. […]

I think the sovereignty crisis [in the Middle East] is so serious that we can talk about exceptional situations such as a coup or temporary dictatorship.

Given the interwoven crises [in the region], how do you evaluate the post-Daesh situation?

Certainly, Daesh will fail, but Daeshism will live on. What matters more here is that the anti-Daesh coalition is trying to base the political power on a national government – like what it did in Iraq, Syria, Jordan and Egypt. Hasn’t this framework [of government] proved a failure after one hundred years?

Will the Sykes-Picot Agreement – [officially known as the Asia Minor Agreement, was a secret agreement between the governments of the United Kingdom and France] which has been the historic and colonial frame of political power in Iraq, Syria, Jordan and Lebanon – be used again? Will this system take hold again? Or do we need to seek another system which can create a political framework not based on concepts such as tribes, nation and nationality as it also recognizes differences and special features of tribes, religions and nations?

I think the existing crises in Egypt, Syria and Iraq cannot be assessed simply based on the legitimacy crisis. The crisis in these countries has been based on the historic framework of their political power, something which has formed thanks to a similar linguistic, ethnic and cultural concept. The framework has stood the test of time for a century.

In a post-Daesh era, if we fail to develop an understanding of the nature of the [legitimacy] crisis and let the previous trend persist regardless of the current crisis and the defeat of the 100-year-old project in Iraq and Syria, the result will be nothing but the continuation of the previous intertwined crises.

What do political theories propose as replacement to prevent this cycle from repeating?

The survival of multi-ethnic and -religious systems which have been established in the form of a nation-state simply hinges on political violence, not enforcement of the law. Take a look at Iraq and Syria’s bloody past in which the violence hidden behind the law has always taken the place of the law.

That’s why Agamben, Schmitt and [Walter] Benjamin talk about contradictions in modern sovereignty, saying that the ruler has a contradictory nature because it has simultaneously fitted into and out of the law. In the Middle East, this contradictory sovereignty has been always given special treatment, allowing it to stand above the law.

In Iraq and Syria, there is no hope for establishing a government which can develop a national-dialogue identity without resorting to brute force. This system is in tatters. A confederate system should be set up in these regions because [other systems] even federalism has failed in Iraq. Federalism has a necessary merging force which can keep it safe from the inside. In the US and Canada, very powerful capitalism acts as a protecting force [inside the system]. […]

Such a mechanism is absent in Iraq. We saw that following the fall of Saddam and the writing of a new constitution, the new power concentrated its efforts on the establishment of a united government.

A federal system can be established only if an advanced political culture exists among members of the confederate government, and these federal and confederate systems should give in to a political connection in the framework of a special political system.

The absence of such a political culture puts the federal and confederate systems at risk. That’s why when these systems face problems, hopes grow for the emergence of a powerful figure who cannot rise to the challenge without resorting to suppression and violence. So the onus is on political theoreticians to redefine the frameworks of a national government.

How can Daesh’s measures be redefined based on such political theories?

Daesh represents an overly extremist version of irrational domination and thinking. Through its political irrationality, Daesh has removed the borders between law and unlawfulness, and the boundaries between law and violence. Their interpretation of Sharia law and violence plays a structural role in their dialogue and performance. Unlike Saddam and other dictators who sought to conceal their violent nature only to maintain calm in society, Daesh is trying to showcase its violence in a naked manner because violence – in Daesh’s reading of Sharia law – is not a tool; rather it has a structural role to play.

Daesh is trying to put on display its violence because the demarcations between violence and law have been blurred. In his well-known article on political violence [The Critique of Violence], Benjamin says that violence is used as a tool because when the law seeks to administer justice, it considers violence as a tool to implement the law. Here the means and end are highlighted; end justifies the means and a cycle is formed. Two types of violence – violence of sovereignty and violence of ideology – emerge.

In the violence of the political sovereignty, the law is suspended – not repealed – under exceptional circumstances and the ruler does not need to resort to the show of force. In the violence of ideology, however, violence is not used as a tool when it comes to enforcing the law; rather it has a structural role and there is no need to justify it [violence].

It is at this point that Daesh has created a situation in which political theoreticians are expected to redefine such irrationality in the form of a theory. Perhaps interpretations by Daesh of political violence can be found in theological works which show how God has descended divine torment on a tribe/nation. Arguably the legitimacy of violence is inherently embedded in the use of violence.

Take a look at the ruins of the Parthian city of Hatra [near Mosul]. This [ISIL hammered away at the ancient city by smashing sledgehammers into its walls and shooting Kalashnikov assault rifles at priceless statues] is the violence history is subject to, a history which – in the eyes of this [terror] group – should not exist. As far as Daesh and its reading of religion are concerned, the interpretation of the passage of time makes no sense.