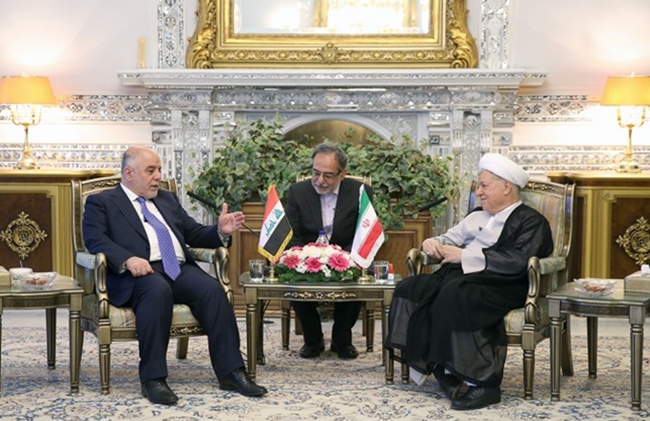 Hashemi Rafsanjani has taken a look at Tehran-Baghdad ties over the years and dismissed concerns that the two countries pose a threat to each other.

Chairman of the Expediency Council Ayatollah Akbar Hashemi Rafsanjani says Iran and Iraq have a lot in common and pose no threat whatsoever to each other.

In an interview with the Arabic-language daily Al-Vefagh, the top councilor talked about a wide range of issues, including his relationships with the Supreme Leader, Iran-Saudi Arabia ties and cross-border relations between Iran and Iraq. On July 5, Alef.ir published a Farsi version of the interview. The following is the translation of PART TWO of the interview which focuses on Tehran-Baghdad ties:

On Iran’s support for Iraq, Hashemi Rafsanjani said, “Presently, we view Iraq as important as our own country, because firstly, it is an immensely important nation; it is also located in a key geographical position. In terms of demographics and natural resources, Iraq is a force to be reckoned with. Iraq has been at the heart of civilization for millennia; it is the birthplace of the Code of Hammurabi; and last but not least the Iraqis are good people.”

He added, “Under Saddam, because of his dictatorial tactics, the country stayed as one entity. However, after his ouster, the country was divided into three or even more opposing and at times warring camps. Such conflicts are gradually coming to surface and that has raised the alarm.”

Hashemi stated, “If God willing, Iraqi leaders carry on with their wise strategies and put aside superficial divisions, either religious or ethnic, and unite over the country’s territorial integrity, Iraq could be a powerful country in the region. Ties between Iran and Iraq are nothing new.”

The councilor went on to say, “When the previous regime was in power, many Iranians were in Iraq; likewise, a large number of Iraqis were in Iran. Many Iraqis have stayed in Iran since the Iran-Iraq war and work in the country like the Iranian people do. Crossing the border is easy. Holy sites in Iraq are popular with Iranians. That’s why on Ashura [the anniversary of the martyrdom of Imam Hussein] and Arba’een [the 40th day after Ashura] many Iranians travel to Iraq. In fact, Iranian people are in love with Iraqi holy sites. If one day the visa requirement is waived, half of Iran’s population will always in Iraq, and accordingly half of the Iraqi nation will be in Iran.”

Hashemi Rafsanjani reaffirmed Iran is sending aid to Iraq and said, “We are serious in helping Iraq and our assistance is not confined to one area. We help the Iraqis with whatever they need, and whatever is possible for us to provide.”

The top councilor added Iran’s relations with the Iraqi government have always been good. In response to Western expression of concern about the growing presence of the Iranians in Iraq, former Iraqi President Jalal Talabani once said: “What do you think the Iranians want from us?”

The chairman of the Expediency Council added, the former Iraqi president had said, “All Iraqi officials like the neighboring country and there is no need for Tehran to pose a threat to Baghdad; in fact, Iran cannot find a better friend than Iraq for itself and Iraq does not perceive Iran as a threat, Iran has helped us to ride out the storm and get to the point where the country is.”

Hashemi reaffirmed the comments of Talabani and added, “Such remarks are entirely wise and accurate. Iran has no designs on Iraq, and Iraq constitutes no threat to Iran at all; to us, ensuring Iraq’s security amounts to contributing to our own security.”