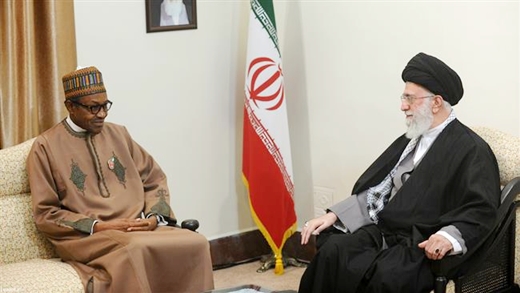 The Supreme Leader has said that the sole way for progress and victory by independent countries is resistance and relying on masses of people in the war of wills.

Supreme Leader of the Islamic Revolution Ayatollah Seyyed Ali Khamenei says the international coalitions that purport to be fighting terrorism cannot be trusted as their members are sponsoring terrorist groups.

The Leader made the remarks in a Monday meeting with Nigerian President Muhammadu Buhari in the Iranian capital, Tehran, where Buhari is to take part in the third summit of the Gas Exporting Countries Forum (GECF).

“International coalitions claiming to fight terrorist currents are by no means trustworthy, since the very destructive elements such as the US are behind the scenes of creating or supporting terrorists like Daesh,” Ayatollah Khamenei said.

The Leader said “Islam’s open enemies” and “foes that bear enmity with Islam in the name of Islam” are the “two blades of the same scissors.”

“Islamic countries must safeguard their identity and interests against these dangerous enemies by stepping up their cooperation,” Ayatollah Khamenei said.

The Leader warned against pinning hopes on the West, particularly the US, in the fight against terrorist groups such as Daesh and Boko Haram, saying, “According to accurate intelligence, the US and some reactionary regional countries are directly helping Daesh in Iraq and are playing a destructive role.”

Ayatollah Khamenei welcomed the election of Buhari, “a committed Muslim,” as the president of Nigeria and called for the identification and exploitation of the capacities for interaction and cooperation between Iran and Nigeria.

The Nigerian president, for his part, described the relations between Iran and Nigeria as solid and long-lasting, saying, “Iran is a major and advanced country and enjoys many capacities for cooperation.”

During the meeting with Maduro, Ayatollah Khamenei said that resistance is the sole way for independent countries to progress.

“Today, the policies of [global] arrogance have afflicted humanity like a blight; and the sole way for progress and victory by independent countries is ‘resistance’ and ‘relying on masses of people’ in the ‘war of wills,” Ayatollah Khamenei said.

The Leader pointed to the United States’ policies toward Latin America, and noted that the US used to regard the region as its “backyard;” however, Venezuela managed to turn the region into an independent one and one with an identity of its own.

Ayatollah Khamenei pointed to the scientific and technological advancements by Iran and said such progress in the face of pressure and sanctions by enemies was made possible by the presence and cooperation of the people.

The Leader emphasized the boosting of ties between the Islamic Republic and Venezuela, and noted, “Iran considers Venezuela’s progress and success as those of its own.”

He said imperialist countries seek to destroy the independence of other states by stoking unrest and attempting to humiliate them and their identities.