Christmas, A Manifestation of Inter-Religious Coexistence in Iran 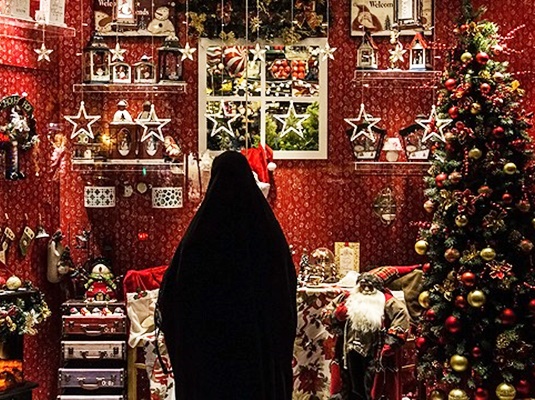 Iranian people’s happiness with their participation in a traditional ceremony, irrespective of their religious beliefs, has played a major role in helping Christmas business thrive in Iran during the days leading to Christian New Year.

These days, it does not matter you are a member of the minority or the majority group; there is an excuse for Iranian people to express their happiness. It seems that people’s happiness with their participation in a traditional ceremony, irrespective of their religious beliefs, has played a major role in helping Christmas business thrive in Iran during the days leading to the Christian New Year.

Apparently based on an unwritten agreement, Iranians seek to show the huge distance between their version of Islam and the one practiced by those who capture nuns in Syria and destruct churches in Iraq, Syria, and Egypt in the name of Islam; a distance as distinguished and clear as the difference between hate and love.

The history of peaceful coexistence between various ethnic and religious groups in Iran is a very long one. One of the oldest churches in the world is still in place in Iran, and has not been harmed even by foreign invasions throughout the history. On the other hand, one can note the exemplary presence and participation of religious minorities in defending the Islamic Iran’s territory and cultural identity, particularly during the eight-year war imposed by Iraqi dictator Saddam Hussein in the 1980s.

The Iranian nation would never forget the visit paid by the Leader of the Islamic Revolution, Ayatollah Seyyed Ali Khamenei, to the house of an Armenian family in Tehran, whose child had lost his life in the war. They will always remember the Leader’s interaction with the martyr’s mother and brothers, and his compliments on the housewife’s cooking.

For those who do not know anything about Iran and the beauties resulted from its cultural diversity, it might be unbelievable that Christians are among the religious minorities who take part in the mourning ceremonies of Ashura, the martyrdom anniversary of Imam Hussein (the third Shiite Muslim Imam); but it is true.

Each year in late December, one could see Christmas decorations and symbols of New Christian Year in certain shopping centres, streets, toy stores, restaurants, and decoration shops in Iran.

During the past two or three years, after the spread of Takfiri [extremist] Islam and the reactionary versions of Prophet Muhammad’s religion practiced by the ISIS and other terrorists groups supported by Saudi Arabia and its allies, one can see that the majority of Iranian people have maximized their cooperation and coordination with religious minorities for better organization of their celebrations and ceremonies.

This year, without any invitation promoted by state and mass media, we can see Santa Claus with his red suit and white beard and hair in crowded parts of Iranian cities, carrying a pack of chocolates and candies. However, the atmosphere of Christmas and the new Gregorian calendar year are more visible in certain parts of Iran, including Tehran.

Here in the Islamic Republic’s capital, if you close your eyes and open them in Mirzaye Shirazi Street [in central Tehran] on the eve of Christmas, you would think you are walking in Yerevan, the capital of Armenia.

Is this spontaneous social move rooted in the natural intelligence of Iranian people and a move to realize the poem written by Saadi, the famous Iranian poet, who said 700 years ago, “Human beings are members of a whole, in creation of one essence and soul”? Do Iranians want to emphasize the huge difference between Wahhabi and Salafi versions of Islam and the true and rational Islam through their tangible and massive participation in special ceremonies of Christians living in Iran?

Whatever the answer is, the difference between ‘Islam in Iran’ and ‘Islam in Saudi Arabia’ is so clear that it can’t be denied.

By paying a visit to different parts of Tehran, the most important city of Iran, one would be amazed by the interaction between Muslims, the majority, and Christians, the minority, in observing the New Christian Year.

It seems that Iranians are using Christmas as an opportunity to show to the Christian world and Western people that they are living in peace, and they are so much different from two groups: The first group is those who pretend to be Christian but bombard the poorest and weakest people, chant the slogans of peaceful coexistence while discriminate against racial minorities, and deploy troops to another part of the world on the pretext of destroying Weapons of Mass Destruction and in the name of defending human rights.

The other group includes those who behead innocent people and sow the seeds of hatred in the name of Islam. These people have lost the meaning of truth even if they are extremely close to the ‘House of Allah’ [in Mecca], the holiest place for Muslims.

With rising religious violence and the spread of Takfiri Islam, and in a time when we constantly hear the sounds of explosion and suicide attacks aimed at brutal slaughter of people in streets and markets, schools, and even religious places throughout the world, particularly in the Middle East, real Muslims in Iran and other parts of the world are paying increased attention to highlighting the teachings of true Islam by laying practical emphasis on the tradition of kindness and philanthropy, following the behaviours of Prophet Muhammad (PBUH).

In Iran, the partnership of the Muslim majority with their Christian compatriots in holding Christmas and New Year celebrations is an opportunity to actualize and display peaceful coexistence in Iran amid the ongoing madness and violence in the Middle East Iranians have seized the opportunity.