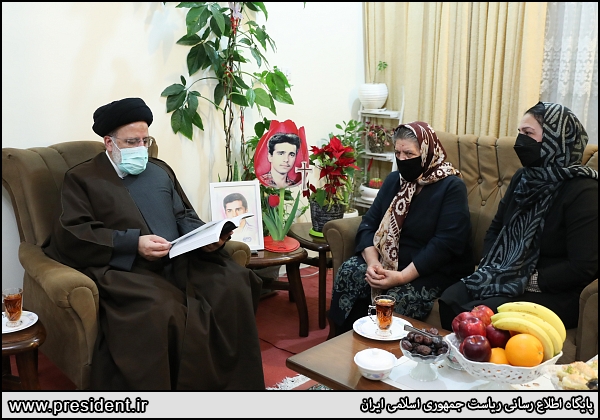 Iranian President Ebrahim Raisi has paid a visit to the bereaved family of a young Christian martyr, who lost his life during the ex-Iraqi regime’s war on Iran in the 1980s, on the eve of Christmas.

Raisi held a meeting on Friday with members of Martyr Vartan Aghakhanian’s family to offer them congratulations on Christmas.

“The reality of Christianity is no different than that of Islam, and Qur’an offers sublime descriptions of Hazrat Mary (PBUH) and Jesus Christ (PBUH),” said Raisi, expressing hope that all Christians will adhere to the teachings of their prophet.

The martyrs, he said, sent the message that the people of Iran always stand ready to sacrifice their lives in defense of their homeland against any aggression, and that “there is no distinctions among Muslim, Christian or Zoroastrian compatriots on this path.”

“To Iranians, Iran is more precious than anything else and its people are ready to sacrifice their lives for Iran,” he added.

The president described martyrs as a “source of pride for Iran and Iranians” and said, “Anyone who is prepared to sacrifice his life for his compatriots, the nation, and social security is dear and deserves respect.”

Raisi said the Iranian nation owes its independence and security to martyrs.
Aghakhanian was only 20 years old when he was martyred during an operational zone in southwestern Iran.