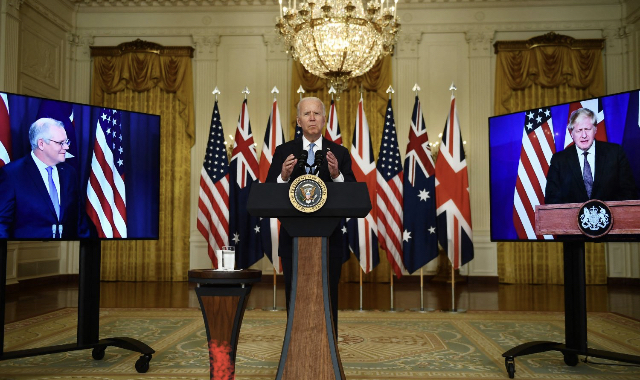 A top Chinese diplomat says the International Atomic Energy Agency should be involved in the security pact for the transfer of a nuclear submarine to Australia, like the Iran nuclear deal.

Chinese envoy to the International Atomic Energy Agency (IAEA), Wang Qun, has suggested that the upcoming handover of nuclear submarine technologies to Australia under the AUKUS security pact is a pressing issue similarly worthy of the attention of the IAEA like the restoration of the Iran nuclear deal, Bloomberg has reported, citing an obtained note.

The latter was reportedly circulated by China among diplomats gathered in Vienna for a new round of Iran nuclear deal negotiations.

“Why do the US and UK say Iran can’t manufacture enriched uranium above 3.7%, while on the other hand openly and directly transferring to Australia tonnes of 90% highly-enriched nuclear-weapons material? This is a classic case and point of a double standard”, he stated.

The official accused western nations of following double standards as they push for a renegotiation of the nuclear accord with Iran that would ban the Islamic Republic from producing military-grade enriched uranium akin to that the US and the UK will be handing over to Australia as part of their security pact.

Beijing has repeatedly insisted that this provision of the AUKUS security agreement, which is seen as directed against China by many political analysts, violates the principles of nuclear non-proliferation.

Wang also stressed that AUKUS “constitutes serious risks of nuclear proliferation” and condemned the pact as a “small Anglo-Saxon clique” in his note, Bloomberg claims.

The Chinese diplomat suggested that by handing over the submarine technologies to Australia, the US and UK will prompt more countries to go nuclear. He suggested that the pact should be scrutinised by the IAEA and the international community. The Russian Ambassador to the Vienna talks, Mikhail Ulyanov, echoed Wang’s statements.

Australia’s envoy to the IAEA, Richard Sadleir, rejected China’s suggestion insisting that the transfer of nuclear technologies under the AUKUS deal does not fall under the purview of the international organisation, which monitors the use of nuclear energy by countries making sure they don’t utilise the technology for military purposes.

Sadleir insisted that it was not the IAEA’s place to discuss the “full scope” of AUKUS. He also promised that his country will continue to provide the agency with all the necessary information.

“Many of these factors are beyond the scope of the board’s purview and would be inappropriate for the board’s agenda at any time. We will continue to provide updates at the IAEA and elsewhere as appropriate,” Sadleir continued.

China has been opposing AUKUS since its announcement in August of this year and the next round in Beijing’s fight against it comes right ahead of a new attempt by the signatories of the Joint Comprehensive Plan of Action (JCPOA, also known as the Iran nuclear deal) to revive the accord with Tehran. The last round of talks in Vienna in May did not result in a breakthrough in negotiations between Iran and the US, who had jeopardized the 2015 accord by withdrawing from it in 2018 and slapping sanctions on the Islamic Republic. Since 2019, Tehran has been systematically backtracking on its JCPOA commitments to convince the US to change its course and lift the aforementioned sanctions. Washington under the new administration of Joe Biden suggested that the lifting of economic measures is possible but not until after Iran returns to compliance with the deal that was undermined by the US in 2018. Tehran has so far refused to do that, but a new round of talks in Vienna will be carried out with Iran represented by a new delegation and a new presidential administration following elections in June 2021.