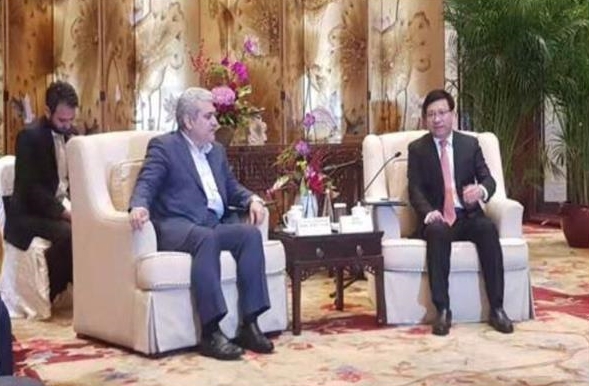 Chen Rugui, the mayor of the Chinese city of Shenzhen, says his country welcomes any scientific and technological cooperation with Iran.

Vice-President for Science and Technology Sorena Sattari arrived in China on Tuesday at the head of a delegation upon an official invitation by the Chinese Minister of Science and Technology. Sattari was greeted by the mayor of Shenzhen on the first day of his trip to the city which is a scientific hub of the country.

Referring to the existing scientific and technological capacities of the city, Chen Rugui said Shenzhen has a prominent position in terms of export volume, especially in the field of engineering services.

Shenzhen is an innovation-based city comprised of private companies.

Talking about the establishment of large companies such as Huawei in Shenzhen, Chen Rugui said the cost of research and development in existing industries is equal to 4.5 percent of the city’s gross domestic product, which is a high number in comparison with international figures.

“Shenzhen is known as the Green City because it has the lowest energy and water consumption, and car and electric bus use is a feature of the city.”

He further praised Iran’s resistance to the sanctions, saying that the Chinese president had a trip to Iran in 2016 that strengthened cooperation in many areas between the two countries.

“China, like Iran, is struggling with sanctions, and we have mobilised all our political, economic, and technological capabilities to defeat them.”

Biotech, Fintech, Internet of Things and Artificial Intelligence are rapidly developing in China. The “China Advanced Technology Fair” will showcase the achievements of Chinese companies in these areas. We also welcome any cooperation in various fields of science with Iran, he underlined.

In turn, Sorena Sattari said that Shenzhen is an innovative and intelligent city, adding that “In Iran, we are also pursuing innovation and are on the path, and with the help of young and creative people in our country, the growth of innovation is expanding every day.”

The Iranian vice president for science and technology went on to say that today Iran has turned into an innovative country, expressing that of the 80 million population of Iran, 33 million are young people aged between 20 to 40 who are at the forefront of change and innovation.

“Five million students are another part of our capacity in this field. Moreover, 90% of Iranians are internet users. Thus, we can claim that half of the Internet users in the Middle East are Iranian, and this has led to the Persian language becoming the ninth language on the Internet.”

Referring to the state of nanotechnology, biotechnology and information technology in the country, the head of Iran’s National Elite Foundation said the sanctions have strengthened the domestic production capacity in Iran so that now 98% of medicines are manufactured domestically. Additionally, the largest Mideast startups in some areas are the Iranian ones.

“Shenzhen” Can Be Sister City of Some Iranian cities

Sattari also said that Shenzhen can be the twin city of some Iranian cities. China’s technological development is a model for us. Since Iran is pursuing an ecosystem of innovation and technology to have an oil-free economy.

“Soon, oil and steel companies will be sidelined by tech companies and they will make a significant contribution to the economy.”

In the end, Sattari invited the mayor of Shenzhen to visit Iran’s scientific and technological capacities.