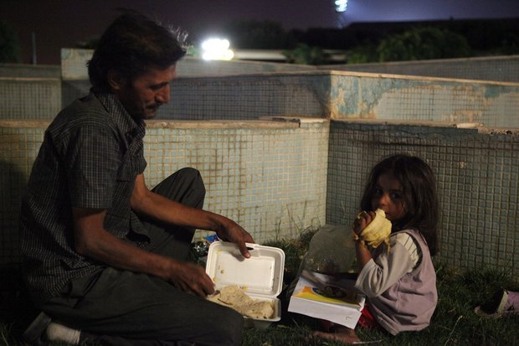 The society acts as a bridge linking citizens to the homeless; it gets food from citizens and gives it out to the needy.

After almost a decade of activity, the Toloo Bineshanha (Emergence of the Unknown) Society has turned into a leading institution in supporting those who sleep rough and addicts who want to kick the habit.

The society has launched a new campaign to collect extra food form feasts in a bid to prevent waste and satisfy the hunger of the needy who cannot afford to buy food. Thanks to social networks, the campaign has drawn a lot of attention from the public and prompted many to offer help to the society.

What comes below is the translation of an interview that Mehr Magazine has had with the head of the Public Relations Office of the society, Sara Chartabiyan, about the massive campaign:

The main activities of the society come in seven stages. In the first stage which is aimed at showing kindness, we try to give out food to the addicts who sleep rough and encourage them to be reintegrated to society. Then, during the treatment stage, they are detoxified and receive psychological and medical treatment like dental care.

The education stage which paves the way for creating jobs and completing the treatment process comes next. Vocational training and educational workshops on psychology are among the courses that the society offers. Afterward, we try to create jobs for those who beat their addiction so that they can make money. Our society has different [training] workshops designed to enable people to get jobs.

Although squandering is generally frowned on by many Iranians, a large amount of food, which can meet the needs of many of our needy fellow countrymen, ends up in garbage can on a daily basis.

Because addicts and those who sleep rough have distanced themselves from society, not very often do people try to personally give their extra food to them. Given this problem, with the help of a number of research groups, the places where they usually stay have been identified and confidence-building measures have been taken.

It has been a decade since the society started giving out food to the needy and those who sleep rough. Based on the studies carried out, the society has come to the conclusion that it can act as a bridge linking citizens to the homeless and get food from them and give it out to the needy.

The introduction of a campaign on social networks was mainly aimed at getting restaurants and banqueting halls involved. Of course, we collect extra food from houses if the number of portions reaches at least 20. When the campaign met with a broad welcome, we swiftly drew up a second phase for the plan which is dubbed “Tehran; A City with No Hungry Resident” and submitted to Tehran Municipality which I hope will be soon implemented.

Based on this plan, food-collecting centers will be set up in five main parts of the city so that citizens can easily refer to the nearest center and hand in food. Every night, the society will collect the food and give it out to the needy. On average, some 2,000 individuals receive food through this plan.

Nothing was better than the massive response from the public in reaction to the campaign and the fulfillment of the objective of the society which is to urge people not to be indifferent to others, especially those who sleep rough.

It is worth noting that since the plan was made public, a number of big restaurants and banqueting halls in Tehran have been cooperating closely with the society. Some in other cities have expressed readiness to implement similar plans.