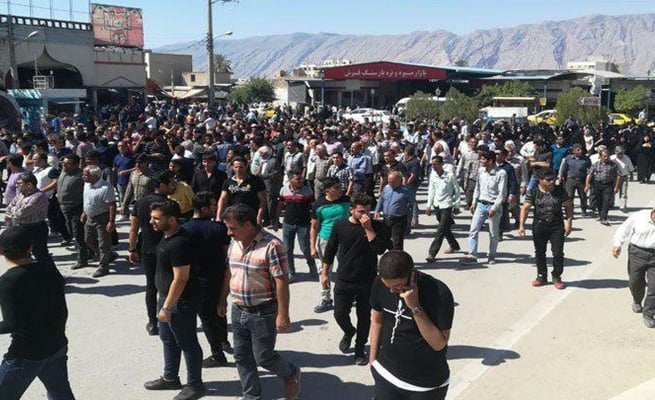 The Wednesday night clashes between security forces and demonstrators protesting a plan to divide parts of the Kazeroon County in Fars Province, southern Iran, has left at least one dead and six wounded.

The protesters were reportedly calling for the release of people detained in small demonstrations in the city on Wednesday.

Fars News Agency reported that the Wednesday protests took a violent turn after people masking their face tried to enter the police station.

Some protestors set fire to parts of the station and police vehicles, according to Asr-e Iran news website.

Located over 1,000 kilometers south of Tehran, Kazeroon has recently been the scene of protests against a parliamentary motion to change the city’s boundaries.

The Wednesday protests were against a motion recently raised in the parliament that separate the cities of the Kazeroon County to form another county.

But people of Kazeroon say cities of Bishapur, Imamzadeh Seyyed Hossein and Dashte Barm are inseparable parts of Kazeroon County.

They have staged protests to block the move, which would slash a range of benefits and jobs the city has received for many years.

Fars News Agency said the Wednesday night clashes seemed suspicious, as the city had seen no major protests since announcements by First Vice President Es’haq Jahangiri and provincial officials two weeks ago that the separation plan was cancelled.

The report also said the protests were started after unknown people used Telegram messaging app to invite people to join the demonstration.

This is while the city had seen no major protests since Kazeroon Friday Prayer Leader Mohammad Khorsand, who himself opposes the division plan, paid a visit to Tehran three weeks ago to discuss the issue with government officials.