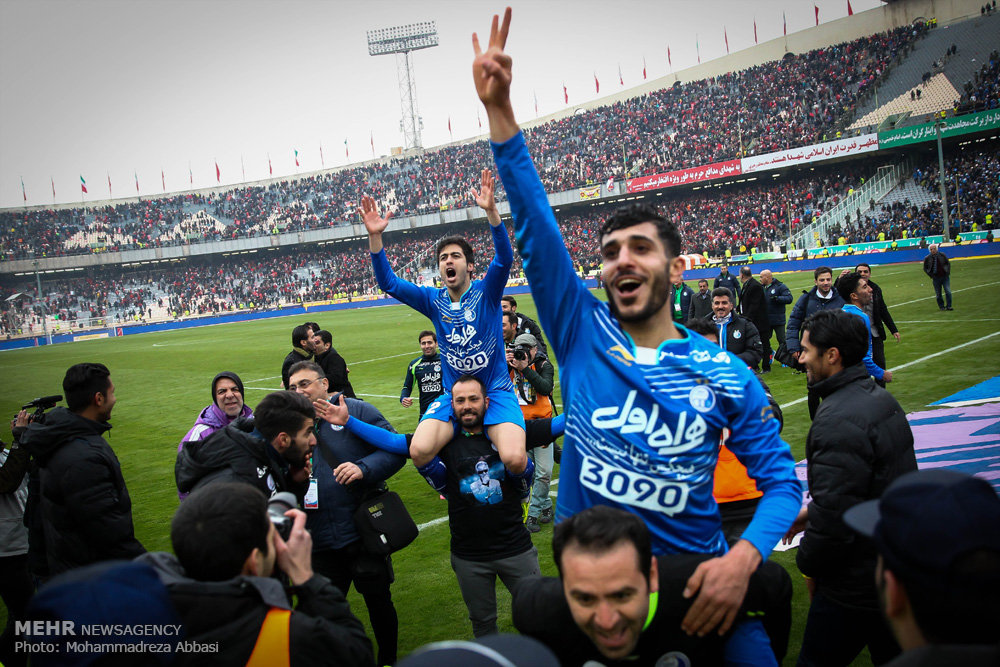 The Iran Pro League table-topper Persepolis should have stopped living in the past in Sunday’s eagerly-awaited derby against traditional archrival Esteghlal in Azadi Stadium, west of Tehran.

Supported by partisan fans outnumbering their counterparts in the stands, the red-clad Persepolis celebrated its opener just five minutes after the kickoff.

Mohsen Mosalman hot-footed it in the left wing to spot the newly-hired Soroush Rafiei in the box with a defense-splitting cross, assisting the striker to beat Esteghlal goalie Seyyed Mehdi Rahmati with an angled curling drive kissing the far corner of the net.

But the early goal failed to dampen the spirits of the blue-shirted players who saw off Qatar’s Al Sadd 4-3 on penalties last week to book a place in the Group Stage of the AFC Champions League.

Capitalizing on the Reds’ defensive blunder behind the penalty area in the 18th minute, Farshid Esmaeili chested down the ball before unleashing an unstoppable goal-bound shot, with goalkeeper Alireza Beyranvand just looking on.

Two minutes later, Esteghlal proved the equalizer was not a bit of a fluke. Esmaeili turned to a provider this time as his delightful left-footed cross was headed home by Ali Qorbani from close range.

The stunned Reds heaped pressure on the Esteghlal woodwork and almost secured the parity on 31 minutes when striker Mehdi Taremi’s header narrowly missed the target.

Midfielder Ramin Rezaeian cupped his face in the 40th minute after his inswinging free kick went inches above the bar.

Against the run of the play, it was Esteghlal that celebrated the third one minute before the break. Striker Kaveh Rezaei dribbled past his marker Mohammad Ansari on the edge of the box to beat Beyranvand with a left-footed low drive.

Under former Esteghlal midfielder, Alireza Mansourian, the Blues took a defensive tactic and pinned their hopes on counterattacks in the second half to secure the lead.

Considering the league top-scorer Taremi’s squandering the gilt-edged opportunities on 52 and 57 minutes, the Esteghlal strategy worked.

With the strikers failing to find the net, Persepolis skipper Seyyed Jalal Hosseini advanced and rattled the bar with a header three minutes before normal time. Hosseini and Rahmati exchanged rants in the dying moments after the Iran full-back was convinced that the goalkeeper was feigning injury to kill time. Ref Alireza Faghani booked both to prevent the verbal attacks’ escalation into a brawl on the pitch.

Rahmati finally received his marching orders for a second bookable offense in the injury time when he apparently pushed Hosseini, who rushed to take the ball out of the net after making it 3-2 with a header.

The game ended seconds later, leaving Persepolis at the top, with 47 points out of 21 games, and Esteghlal in third place, with 10 points less.

Collecting 41 points, Tractorsazi of Tabriz sticks to the heels of Persepolis.