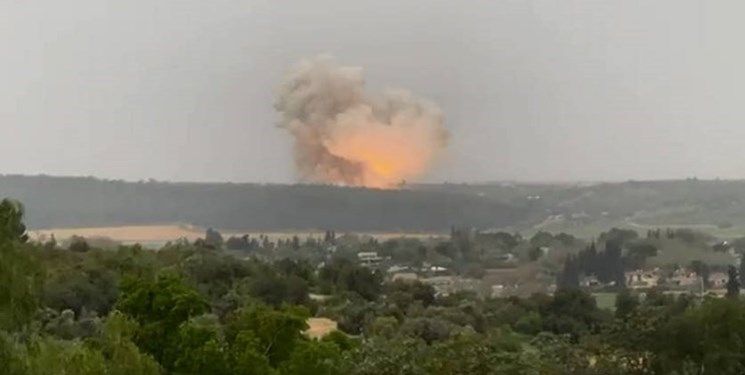 Israeli officials and media have announced that an explosion at an Israeli military facility and research centre in the city of Ramla in central occupied Palestine was due to an accident which happened to a satellite carrier.

However, the IRGC-affiliated Fars News Agency says the claim can easily be refuted based on existing evidence.

The following are highlights of the article.
“Despite the strict news blackout imposed by Tel Aviv officials to keep the story from leaking out, finally images and videos of the blast at the Tomer military factory went viral and the Israeli daily Haaretz confirmed the explosion had occurred on Tuesday April 20, 2021.

The location of the explosion is important, too.

The Tomer company is affiliated with the Israeli Defense Ministry and is involved in cutting-edge technology focusing on the development of rocket engines running on solid fuel.

The factory produces some of the Israeli regime’s most important military hardware, including engines for Arrow air defense system missiles as well as the Shavit satellite carrier which particularly sends into orbit Israeli spy satellites.

The latest launch by the Shavit satellite carrier took place in July 2020 when it put the Ofek 16 spy satellite into orbit.

One of the key missions of the Ofek 16 satellite was to spy on countries such as Iran ans Syria.
Generally speaking, Tomer is the heart of the Israeli regime’s military industries as it develops many of the modern technologies of Tel Aviv’s war machine.

But what actually caused the explosion at this sensitive military factory?

As announced by Israeli authorities and media, the blast happened as a result of an error which occurred when a missile was being tested.
Nevertheless, the intensity of the blast seen in the images indicates it was much larger than what would have been the explosion of a satellite carrier engine.

Moreover, when testing space engines, they usually adopt high safety measures as engine parts are very sensitive and conform to space standards, so that any accident or blaze will be put out using special fire extinguishing equipment.

However, images of the recent blast which struck the heart of the Israeli military industries show a massive explosion coupled with huge flames and smoke.

Another point worth mentioning is that when we glance at Tomer’s past record, we find out the military company often conducts tests on its rocket systems outside the location where the recent incident happened. For example, tests pertaining to the Shavit satellite carrier are conducted in an Israeli airbase, or tests on the Arrow air defense system are carried out outside occupied Palestine in Alaska in the United States.

There is also a possibility that the explosion was a deliberate act due to the high sensitivity of the facility on the one hand, and domestic discontent within the Israeli regime, Israel’s acts of sabotage in the regional countries and its intelligence war on the other.

Several attacks on Iranian ships in the Mediterranean Sea and the Red Sea, the assassination of top Iranian nuclear scientist Mohsen Fakhrizadeh,and two acts of sabotage conducted by infiltrators at Shahid Ahmadi Roshan uranium enrichment facility are among the most high-profile acts of sabotage where the Israeli regime is the prime suspect thanks to conclusive evidence presented by Iranian security institutions.

What is more, the eruption of extensive discontent inside the Israeli regime and Israeli Prime Minister Benjamin Netanyahu’s failure to form a coalition government, which has resulted in holding four parliamentary elections over the past two years, are clear signs of a political deadlock inside the regime, which has stoked discontent among different Israeli groups.

So one of the possible factors contributing to the explosion at the Israeli military factor is domestic Israeli groups’ attempts to drag Netanhau into a stalemate and hold the fifth Knesset (Israeli Parliament) election.

Of course, the existence of domestic discontent as a factor contributing to such events is nothing new as similar cases had surfaced in the United States before. In summer 2020, an arson attack was carried out by some discontented individuals against a helicopter of the US Navy at San Diego naval base.

The same day, Washington accused Tehran of being involved in the incident, and charge that Iran vehemently denied.