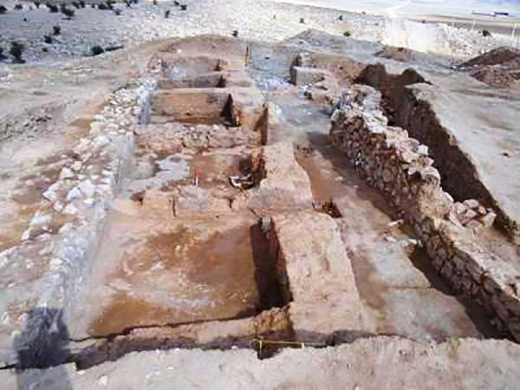 Tal Ghale Seyfabad in the southern city of Kazerun was a trade and economic center in the Sassanid era.

Iran’s Cultural Heritage News Agency – www.chn.ir – has reported that a first phase of excavations in Tal Ghale Seyfabad in Kazerun, Fars Province has resulted in important discoveries. The following is a partial translation of the report:

Throughout the first phase of archeological exploration of the region known as Tal Ghale Seyfabad in the southern city of Kazerun, which used to be a major dates distribution center and storage depot, seven large earthen jars dating back to the Sassanid era were discovered.

One day prior to this finding, a dice and a backgammon piece belonging to the same era were unearthed. Along with the large jars, a large number of date seeds were discovered in the area.

“Analyses are being conducted on different types of date seeds discovered. They are likely to be the dates grown in Shapour Khoreh [one of the five provinces of Fars region during the reign of the Sassanid Empire] which would be distributed to other parts of the empire after being stored there,” Parsa Ghasemi, an archeologist, said.

Tal Ghale Seyfabad is located 15 Km to the southwest of Kazerun and is along a natural gas pipeline to the north of Seyfabad Village. Based on archeological findings, the region has been a trade and economic center of Shapour Khoreh.