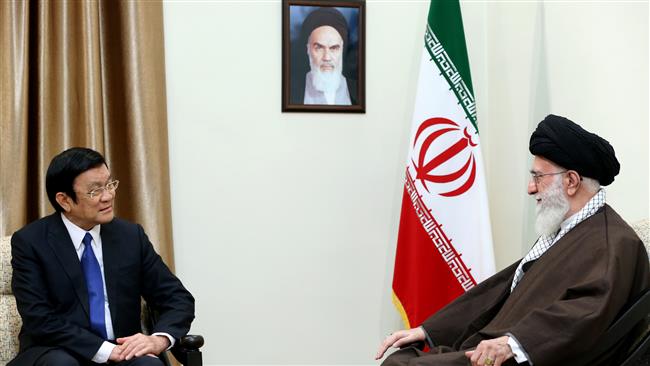 Leader of the Islamic Revolution Ayatollah Seyyed Ali Khamenei says the only way for independent states to counter interference by world powers is for them to close ranks.

In a meeting with Vietnamese President Truong Tan Sang in Tehran on Tuesday, Ayatollah Khamenei said world powers are making attempts to meddle with the internal affairs of other countries.

“These acts of interference have sometimes been through waging wars like the Vietnam War and sometimes through other methods, and the way to counter such meddling is cooperation and rapprochement between independent countries,” said the Leader.

Ayatollah Khamenei also said that the Islamic Republic’s policy is based on cooperating with Asian states including Vietnam.

“We are also aware of your cooperativeness at international bodies and we believe that we must broaden cooperation as much as there is possibility and potential,” the Leader said.

Ayatollah Khamenei also heaped praise on the “courage and resistance” of the Vietnamese nation and prominent figures like veteran revolutionary leader Ho Chi Minh and military commander General Vo Nguyen Giap against the US aggression in the 1940s.

For his part, the Vietnamese president offered gratitude to the Islamic Republic for its support of Vietnam within international bodies and said his country will continue to support Iran’s right to peaceful nuclear energy.

He expressed hope that Iran would view Vietnam as a key partner in its transactions.