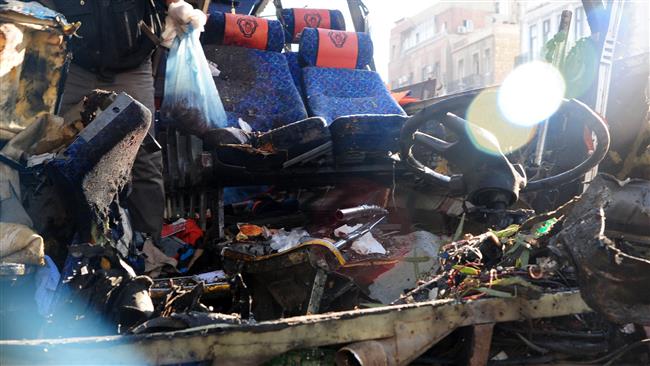 Iran called on the UN to seriously confront terrorism and oblige countries to fulfill their commitments as stipulated in Security Council resolutions.

Iran has denounced the terrorist attack against Shia Lebanese pilgrims in Syria, saying the crime has been committed in line with the goals of the Israeli regime and terrorist groups to take revenge on the resistance movement.

“The main perpetrators of such crimes are those who are providing terrorists with logistic and financial support,” Foreign Ministry Spokeswoman Marzieh Afkham said on Monday.

She added that support is continuing for terrorists under the guise of arming and training so-called moderate militants.

The Iranian spokesperson called on the United Nations to carry out its duty to seriously confront terrorism and oblige countries, which are supporting terrorism, to fulfill their commitments as stipulated in the resolutions of the UN Security Council.

At least seven people were killed and 20 other injured when a bomb blast hit a bus carrying Lebanese Shia pilgrims in the central district of Souq al-Hamadiyeh in the Syrian capital of Damascus on Sunday.

No individual or group has claimed responsibility for the deadly incident which took place near an ancient citadel. However, such attacks on civilians are usually carried out by Takfiri militants operating against the Syrian government.

The Takfiri terrorist groups, with members from several Western countries, control swathes of land in Syria and Iraq, and have been carrying out horrific acts of violence such as public decapitations and crucifixions against all communities such as Shias, Sunnis, Kurds, and Christians.