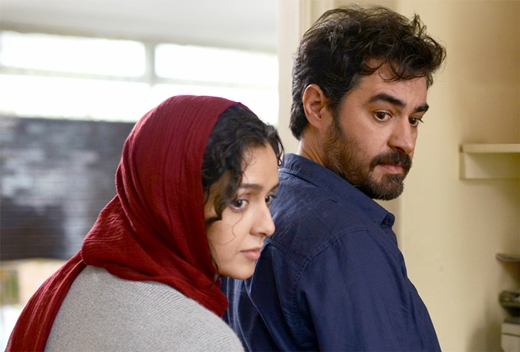 “The Salesman”, the latest film by acclaimed Iranian director Asghar Farhadi, has received great reviews by film critics who watched the film in the ongoing Cannes Film Festival, and is said to have a great chance for winning the Palme d'Or as well as other awards in the prestigious festival.

Here’s IFP’s coverage of various reviews by famous critics published in the social media. On covering the reviews, we used a Farsi report by Donyaye Tasvir film magazine.

The Salesman was screened on Friday night for critics and media professionals one day before the official screening at Cannes 2016.

Many film critics who watched the film at Debussy Theater expressed their spontaneous reactions in their Twitter accounts.

Matthew Anderson, the editor of BBC Culture, said that, “[I] Saw Asghar Farhadi’s intense moral drama, The Salesman, at Cannes 2016. Give this film the Palme d’Or!!”

Donald Clarke, the film correspondent for The Irish Times, said, “[The Salesman’s] Treads similar ground to A Separation (mystery within marriage), but [a] bit drier and more academic. Still gripping.”

Peter Howell, a movie critic for the Toronto Star, said that the Salesman is “the slow drip of human frailty and its consequences, expertly measured out by Asghar Farhadi. Quietly devastating.”

Jordan Ruimy, a film writer for AwardsDaily and IndieWire, said, “I think it’s quite clear The Salesman is not A Separation, but, then again, what is? Great movie, badly needed after the Penn.”

Bilge Ebiri, a film critic for the Village Voice, also noted that Farhadi’s The Salesman was an “expertly made” movie.

Chief Film Critic of the Variety, Owen Gleiberman, said that “the new movie from Asghar Farhadi, the masterly Iranian director of ‘A Separation’ and ‘The Past,’ is another finely cut gem of neorealist suspense.”

“When you watch a Farhadi film like ‘A Separation’ or ‘The Past’ or his new one, ‘The Salesman’, you’re seduced, almost by a kind of invisible reverse trickery, into a situation of clear-eyed naturalism, except that you also start to realize you’re caught in a gathering storm, and it has everything to do with the shifting interior sands of the people onscreen. You’re caught up in something that can only be called suspense, and it’s galvanizing, but the suspense hinges purely on what’s going on in the characters’ hearts and minds,” Gleiberman said.

“The Salesman, rather uncharacteristically for Farhadi, opens on a note of stark cataclysm… For a healthy stretch, the film is even more low-key, minimal, and contained than the earlier Farhadi films. Yet the writer-director’s technique is just as assured as before. Every shot is in place, every line leading to an outcome that feels quietly up for grabs,” he went on to say.

Ali Moallem, the editor-in-chief of Donyaye Tasvir, said, “The Salesman, fortunately, was a very successful movie in story-telling, and the audiences were all sitting bolt upright. Now we can say it for sure that Farhadi is the best story-teller in Iranian contemporary cinema.”

“Farhadi knows the turning points, and beginning and the end of his story, and directs his stage and actors. This is why story-telling, which is considered to be a very easy job by many people, takes place in the best way possible in ‘The Salesman’,” the Iranian film critic added.

In her review published in the Play List, Jessica Kiang writes that, “There is no greater chronicler of the minute but manifold disappointments and disillusionments of which irreparable rifts in relationships are made than Iranian director Asghar Farhadi. His last four films — ‘Fireworks Wednesday,’ ‘About Elly,’ ‘A Separation’ and ‘The Past’ —  have all examined compromised coupledom in some way. And all have proven Farhadi’s astonishing capacity to trace the ramifications of the incredibly ordinary — an unanswered door, a well-meaning white lie, a forgotten phone — as they unspool with tick-tock clockwork logic toward extraordinary climaxes, that feel both inevitable and unexpected. His new film, ‘The Salesman,’ is entirely in that mold, though it’s less about a separation than a sundering, about a splinter that opens up a chasm in a marriage that in turn exposes a gulf in Iranian society.”

Also in an article in The Wrap, Debbie Emery says, “Going into the Cannes Film Festival, Asghar Farhadi‘s “The Salesman” seemed an early favorite to win the gold. Now that the film has screened, we can say for certain that Farhadi absolutely remains a force to reckon with.”

Hollywood Reporter’s Deborah Young also writes that, “Returning to film in his native Iran after the French interlude of The Past, Asghar Farhadi continues his exploration of the dark side of the soul, using a traumatic assault to trigger a young husband’s uncontrollable thirst for revenge.”

“Lacking the astounding social complexity of his Academy Award winning drama A Separation, here the gears are not so hidden and a sense of contrived drama leads to some tedious sections. But all is forgiven when the final punches are delivered in a knock-out finale that leaves the viewer tense and breathless,” she added.

“At this point there’s not much doubt that Farhadi’s work has revolutionized new Iranian cinema, pulling it out of the much-beaten path of realism and self-reflection pioneered by directors like Abbas Kiarostami and Mohsen Makhmalbaf and onto a new, highly dramatized and theatrical road. The Salesman takes this tendency to its limits, even incorporating a theater play into its story of hurt pride and revenge,” Young reported.