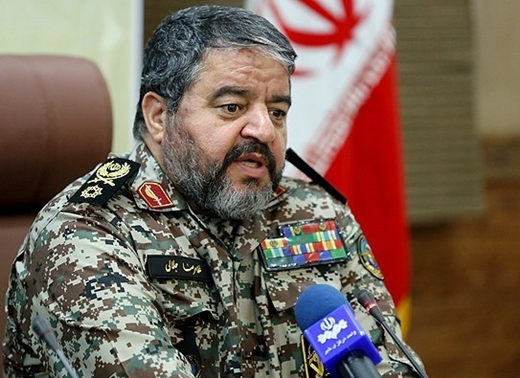 We need a document mapping out our defense strategies in the face of economic war, Brigadier General Gholamreza Jalali said.

New threats to Iran in the aftermath of the Joint Comprehensive Plan of Action (JCPOA) should be identified, said the head of the Passive Defense Organization, citing the fact that threats will be transformed after JCPOA takes effect.

At a press conference on October 6, Brigadier General Gholamreza Jalali enumerated the eight new approaches his organization has adopted to fend off cyber, environmental, radioactive, chemical and economic threats against the country.

What comes next is the translation of part of his remarks filed in a report by Mizan Online News Agency on Tuesday:

The brigadier general said stepped-up efforts to gather information on infrastructure as well as industrial espionage are among threats that will crop up in the post-JCPOA era, adding, “A committee to monitor the implementation of JCPOA as far as US measures are concerned must be formed so that it can examine every move by the Americans.”

He said that some remarks by the Americans can amount to violation of JCPOA, adding, “We have handed in our views about JCPOA threats on different fronts to parliament’s JCPOA Review Committee and we will present our views to the chamber in the future.”

Jalali went on to say, “We need a document mapping out our defense strategies in the face of economic war and the document is expected to be devised with the help of the government.”

The head of the Passive Defense Organization referred to suspicious movements which seem to be part of an economic war and said, “Those who denounce as nonsense agricultural self-sufficiency and independence, either intentionally or unintentionally, are going down the path which contributes to the strategy of the enemy.”

He said that Iran has information interaction with some countries when it comes to cyber threats and added, “In the cyberspace, we can interact with countries such as Russia, China and India with whom we share convergent ideas.”

On the Mina tragedy where a lot of pilgrims, including Iranians, died, he said, “An investigation needs to be conducted into whether there has been any foul play. However, there is evidence that the incident was not accidental.”

Jalali added, “Whether the stampede was deliberate or not, grudge by Saudi officials toward Iranian pilgrims has been in evidence.”

He said that the dead and injured were treated the same and concluded, “Hajj rituals should be managed through contribution by Muslim countries and those in charge should convince Islamic countries to contribute to the management of Hajj.”