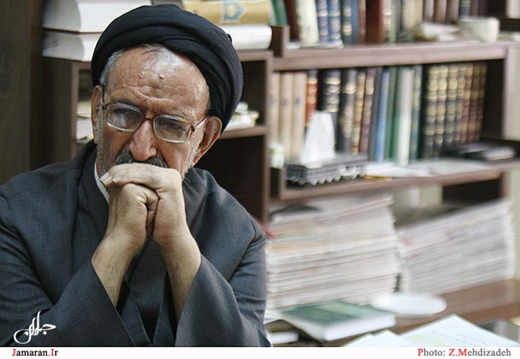 A former Iranian ambassador has explained his mission in Iraq, rejecting as baseless rumors that Saddam waged war because Iran had ignored his warnings.

A former Iranian ambassador to Iraq has reacted to claims that the late Imam Khomeini had insisted on war with Iraq despite advice by his inner circles to avoid such a conflict.

A story from the days predating the Iran-Iraq war has made the rounds on social networking sites despite the fact that Iran’s former ambassador to Iraq – Seyyed Mahmoud Doaei who knows things first-hand – has already denied it outright.

Sharq daily’s Marjan Towhidi had a Q-and-A with Mr. Doaei about his stint as Iran’s ambassador to Iraq, his contacts with Saddam and how the war erupted. The following is the translation of PART ONE of the interview ( Part Two ):

Seyyed Mahmoud Doaei had come to the daily’s office with his characteristic humbleness. New information on the Internet on how the Iran-Iraq prompted him to share with us his first-hand information about the imposed war.

What was the story?

In an interview with a news website, Abdolali Bazargan [the son of former Prime Minister Mehdi Bazargan] has evoked a memory of the pre-war era: Once in 1980, I was asked to attend a consultative session of the Council of the Islamic Revolution on an important issue. Iran’s ambassador to Iraq Mr. Doaei was also there. I was told Mr. Doaei had a report to submit.

Mr. Doaei said, “… Last week Saddam Hussein summoned me, expressed strong protest against [Iran’s alleged] interferences and disruptions and said no longer could he tolerate such a situation. Saddam said, ‘You go to Tehran and tell Mr. Khomeini that Iraq was the first government which recognized the Islamic Republic. If he [the late Imam Khomeini] let me, I will personally come to Iran to hold talks and settle our differences. If he is not willing to talk with me, I will send a high-ranking delegation to Iran, or the Iranian government can send a top ranking team to Iraq for talks so that we can patch up our differences. I cannot take the current trend anymore and I will launch a military attack on Iran to put an end to such a situation.’

Mr. Doaei then stressed that he [Saddam] is a guy who will [definitely] launch military attacks. The Council of the Islamic Revolution decided that Mr. Doaei together with Messrs. [Mehdi] Bazargan and [Mohammad] Beheshti meet with the Islamic Revolution leader [the late Imam Khomeini] to explain the situation on the ground and ask what should be done.

In the meeting, Mr. Doaei tells the whole story as well as Saddam’s threat. The leader tells Mr. Doaei not to pay any attention to him [Saddam]. Then Mr. Bazargan steps in and argues that … In response, the leader says, ‘I said [what I said]. Pay him no attention.’

Once again, Mr. Beheshti starts to reason with the leader, but Ayatollah Khomeini does not wait for Beheshti to finish his words, rises to his feet and says for a third time that they should not pay any attention to Saddam. He then moves toward the door.

Being so dejected, Mr. Doaei tells Imam that he will not go back to Baghdad. Mr. Khomeini, who was close to the door, turns back after a short pause and says, ‘It is your responsibility to go [back to the mission].’ He then leaves the room without waiting for a response.

Those gentlemen come back to the Council of the Islamic Revolution. A downcast Mr. Doaei starts crying and says, ‘Swear to God! He (Saddam) will attack. No one can do anything [to prevent it].’ And after a while Iraq mounted a surprise attack against Iran.

Q: Let’s go to a meeting between you, the late Ayatollah Beheshti, Mr. Ebrahim Yazdi and the late Imam. Apparently the three of you talked about the threat of war and the need to hold talks with Saddam, with you saying that Saddam has asked for a personal meeting [with Imam] and Imam turning it down. Earlier you denied such a meeting and what Mr. Abdolali Bazargan said about it.

A: The scenario they have created is distorted or damaged from different perspectives. They claimed that I returned from Iraq with a message from Saddam in 1980, but I was not in charge then. I was called home one year earlier, after I served out my term [in Iraq]. Back then I was in charge of the Ettela’at newspaper.

Later they claimed that Saddam had summoned me, but I said that I had no [personal] meetings with Saddam except for those which came my way according to protocols and that I had not had any message from Saddam to convey to the late Imam in the presence of senior officials.

Thanks to Iran’s complaints against their movements and their failure to take note of Iran’s good intentions, the only case which came up for talks was a proposal suggesting that a representative with full authority from Iran come over for talks.

The proposal was brought forward by Sa’dun Hammadi, the then Iraqi foreign minister. There was nothing else except for this proposal. The late Imam prudently said that he preferred a representative who was elected and recognized by people enter the talks.

“We have elections ahead for president and parliament. I prefer to see an official who has political responsibility in the country to represent Iran in the talks. If you have good intentions, you should help maintain calm until Iran elects its office holders and then talks can be held,” the late Imam said.

He wanted somebody who cared about the homeland and the revolution to go on that mission.

A: The topics Mr. Jafari has referred to could be answered by Mr. Yazdi too. The point I want to make here is that a scenario which was created a few years ago to tarnish Imam’s image and attribute false things to him is recently changing hands on Telegram claiming that it is part Dr. Yazdi’s recollections.

But what is certain is the fact that untrue materials are nowhere to be found in his memories. Courtesy of his piety and accuracy in recalling his memories, he will not include an untrue story – which has never happened – in his memories.

I remember the time when Dr. Yazdi – who was seeking to record his memories – handed me part of his memoir which focused on Iraq to study. I did study it and let him know about my views on the date of some of his memories. I found no such reports in his memoir.

Certain friends attribute a distorted and untrue story to Dr. Yazdi due to his position and the significance of his memories. What they do is in fact cruelty to him.

Q: By and large, do you think it was possible to prevent the war from erupting despite all [provocative] movements of Iraq?

A: The war could have prevented if Iran had surrendered to Iraq’s demands and renounced its national sovereignty. No revolution would have bought such an idea. The Iraqis wanted to act against what was envisioned in the 1975 Algiers Agreement as far as the question of the Arvandrud River was concerned. They wanted to lay claim to Shatt al-Arab [or the Arvandrud River].

They also claimed that the triple islands [in the Persian Gulf] did not belong to Iran and had to be handed over to their Arab owners. They also sought to make Iran offer concessions on Arabic- and Kurdish-speaking Iranians. Since Iran lacked a powerful army in the early months after the revolution, the Iraqis wanted to seize the opportunity and make Iran give in to their conditions.

Q: Do you think talks could have prevented the war if they had ever been held?

A: It could have been put on hold, but talks could not have prevented the war unless Iran would have given in to their demands.